In which Bob Hammond discovers that, as the instructor aboard, his novice crew are likely to take him, very precisely, at his word… 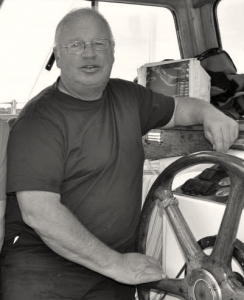 “Just try making it
in the sink mate,”
I suggested

It is a fact that the human brain feeds off new ideas, and, when placed in an alien environment, is happy to accept without question most things that are thrown at it. This trait has led to many a hapless apprentice being sent to stores for a long stand or weight (wait), depending on who’s telling the story, sky hooks and other such nonsense.

One eager young dinghy instructor, in his first role on larger yachts was happy to oblige when asked to go to the chandlers to purchase a spur-lash for the anchor, as obviously no anchor ever went in without one. Only the total collapse into laughter of the shop assistants alerted him to something being wrong with the request.

What I love about being a yacht instructor is taking such innocents out for the first time, introducing them to a new world and then watching them develop into confident and proficient sea-men and women. For any yacht to run smoothly communication is the key, and this is even more important when the skipper is the only person on the boat who has ever been to sea before. There have though been occasions when I have not been clear enough.

On one particularly cold, windy passage, a crew member had gone down below to make tea. The ability to produce hot food and drinks at an angle of forty-five degrees and bouncing through metre-high waves is crucial to a person’s enjoyment of our sport. We waited in the cockpit for the brew to appear, anticipating the pleasure of putting hands around a warm mug. We waited some more. Then I popped my head into the companionway to see what the delay was.

Using the method which would have worked perfectly well in his kitchen at home, the tea maker was having some difficulty getting the boiling water into the mugs. An increasingly large amount of water was sloshing about between the fiddles on the work surface; a soggy biscuit and a packet of crisps, and one stray teabag floated about in it.

“Just try making it in the sink, mate,” I suggested. At least the spillage could go safely down the plug hole until his aim improved.
“Good idea,” he replied.

I directed my attention back to the needs of the cockpit crew navigating the busy Solent waters, and waited. Time passed and I peeped in again. The mugs were still on the work surface. I went down stairs to investigate, and found him attempting to ladle the concoction, complete with milk, from the sink into the mugs. He had taken me at my word and used the sink as one big teapot.