Book of the Brest Festival

This is a book for anyone who likes old boats and the traditions of the sea. And of course it would make an ideal gift(!) It’s packed with photographs which have short insightful captions, and it covers the last few decades of the trad boat revival as seen at the massive Brest Fêtes Maritimes gathering. Nikon-magician Nigel Pert and Dan Houston began preparing the book in pre-lockdown February, choosing from tens of thousands of Nigel’s fantastic photographs over the whole period.

It’s come out really well and has a superb high quality feel, that insists on being taken off a coffee table or out of the shelf next to the almanac. It’s large format with big photos and explanatory text by Dan – in both English and French.

Brest Fêtes, which began in 1992, should be on the bucket list of visits of any sailor, not just for its size, but for the sheer fun of being there. It is a big festival – that sees nearly 2,000 boats manned (and womanned) by 10,000 sailors in front of a quayside crowd that can pull a million visitors flocking to the Brittany port over the week.

Brest 2020 was due to begin on July 10 but was Covid-cancelled in early May. So sadly no-one will be making the passage to the eighth four-yearly festival this year (SOB!). The festival expects to return in 2022 although organisers have not confirmed this date. (All the more reason to check out this new book: Celebrating Traditional Boats!)

Sir Robin Knox-Johnston, Britain’s greatest living sailor, and a fan of the festival and joint Patron with Olivier de Kersauson at the last event in 2016 writes an amusing foreword that beautifully sums up the festival – about how he fired a canon from the Thames Sailing Barge Lady Daphne, at the first event in 1992.

With text in French and English there is also a French cover version – Les Fêtes Maritimes de Brest, see right: 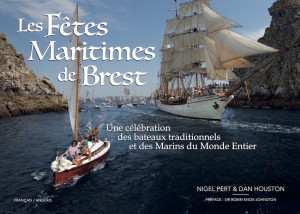 Both English and French cover versions are available on this site and also through Amazon. Click for Celebrating Traditional Boats: HERE

We’ve had some nice comments already, as per our back cover below. Check it out in our SHOP page. 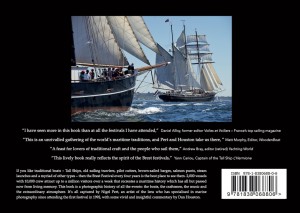 Back cover in English 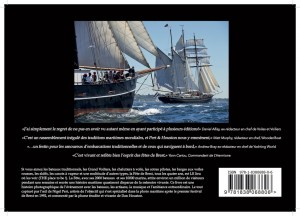 Low resolution screenshot of the contents page… this photo, with its artistic geometry and tricoleur feel is much sharper in the book.

Low resolution screenshot from the chapter: Close to the Water