The third Hamble Classics Regatta hosted by the Royal Southern Yacht Club, over the weekend of 15-16 September, was another stunning success with 75 classic and spirit of tradition yachts entered for two days of racing in sunshine and breeze. Building on the success of the two previous regattas, there were entries from as far afield as Falmouth and Ipswich, with some boats returning for the intense but well-spirited racing and others simply to enjoy the fun.

With support from Spinlock, Performance Rigging, Classic Marine, The Sandeman Yacht Company, Ratsey & Lapthorn Sailmakers, The Elephant Boatyard, A-Plan Marine Insurance and Joseph Perrier Champagne, the weekend had a packed social programme beginning with tea and cakes on Friday afternoon laid on by the Royal Southern Ladies’ Committee, and the Hamble Classics Dinner on Saturday evening at which 230+ guests enjoyed anecdotes from the guest speaker Sean McMillan, CEO of Spirit Yachts, this year celebrating 25 years of yacht building. 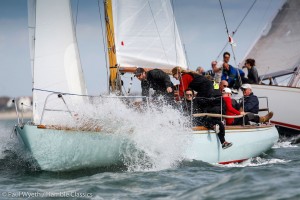 Whooper won her class – in IRC1

With the Hamble Classics fleet as diverse as ever, from Ian Armstrong’s 16 foot Herreshoff 12.5 Gloriana up to Michael Hough’s 65 foot Chloe Giselle, this yacht was the largest of five Spirit yachts contesting the increasingly high profile IRC Zero class. Of the smaller boats David and Sue Pennison’s new home-built Satellite caught the attention of the Concours judges, while the sight of sails being hoisted on the big classic gaffers, Aeolus, Jolie Brise, Peggy Bawn and Thalia served up a big helping of purest nostalgia.

Dovetailing neatly between two low-pressure weather systems there was more breeze than predicted for the Saturday racing, sponsored as usual by Spinlock, and less than the 20 knots that some had been expecting on Sunday, so both days delivered the finest of Solent racing conditions.

With 20 boats new to the event this year and a perfect forecast for Saturday’s river finish to complete the first day’s racing, the Principal Race Officer Peter Bateson gave a detailed briefing before the fleet headed out to the two start line areas, Red Line and Green Line, dividing the fleet into the larger and smaller yachts. 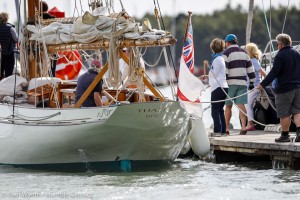 The gentle flood tide would deliver the fleet back to the Royal Southern Yacht Club and the smaller boats on the Green Line under the direction of Stephen Parry were sent into the river to finish under spinnaker just 200 metres south of the club’s Prince Philip Yacht Haven. This included the three dayboat classes, XOD, Dragon and 6-Metres, plus the Regatta 2 class and smaller gaffers.

Out on the Red Line the Spirit Yachts were sent on a long first beat to Lymington, IRC1 & IRC2 had two races and the Regatta 1 class and big gaffers one race each, these classes finishing in the Solent. One race on Sunday completed the series for each class.

A popular element of the regatta is the Concours d’Elegance Awards, this year sponsored by A-Plan Marine Insurance. David Aisher, a past Commodore of the Royal Ocean Racing Club and owner of the 1888 gaff cutter Thalia, was again chairman of the Concours judging team and was joined by Jane Coombs, founder member of the Antigua Classic Yacht Regatta, and Hamble Classics devotee Christopher Gillingham.

The now famous Elephant Boatyard Rum Party kicked off at 1400 just as the Concours judging team were setting about inspecting the 25 yachts submitted for inspection, mostly berthed in the club’s Prince Philip Yacht Haven but some requiring a ride in the club launch. The judges expressed their surprise and delight at the quality of entries and the difficulty this posed in deciding the winners. Meanwhile the Spinlock prizes, a Deckvest and rucksack, were presented to the leading boat in each class. 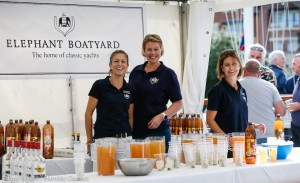 Rum party with the Elephant

Over the two days of racing fortunes ebbed and flowed in most of the eleven classes, but Oui Fling (Irvine Laidlaw) in IRC Zero, Whooper in IRC1, owned by Giovanni Belgrano but this year skippered by Crawford McKeon, and Suvretta (Tim Yetman) in IRC2 all won their class for the second year running. Ivy Green regained top spot in the Gaffer 1 class and in Regatta 1 class a newcomer, the S&S designed GRP Sagitta 35 Ugly Duckling of Hamble (George Beevor and Olly Bewes) took first place overall from another S&S designed boat, the She 31 Shelagh (James Otter). 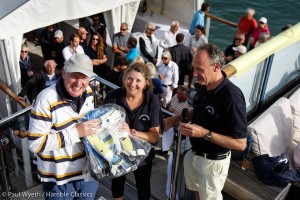 A lifejacket is a useful prize! Anthony Talbot, crew on Dragon Tschuss, receives his Spinlock Deckvest from Vicki Weston and Jonty Sherwill

The easiest win of all was for the Rob Humphreys designed Old Mother Gun (aka OMG) in the nascent Mixed Handicap MH1 Class for more modern wooden boats and other boats that are eligible for Hamble Classics but can’t muster enough for a class start. With the other three entries in the MH1 class dropping out due to various circumstances OMG enjoyed herself racing alongside the pre-1971 IRC1 Class.

The Gaffer 2 class was again won by the diminutive Gloriana but the Regatta 2 class was closely fought and by the most varied group of boats in the regatta. The top raters Cockleshell, Ampere and Mandarina could not hold off the ‘lightning’ quick Harrison-Butler Sabrina (Craig and Kate Nutter) or Applejack, the Contessa 26 of Craig and Natalie Cossar, which won the class on corrected time tie-break by just 75 seconds.

At the main prize giving on Sunday afternoon the 25-strong team of volunteers and club staff were thanked for their efforts before the class winners and runners up received their race prizes and the special trophies awarded: Tea-for-Two trophy to Calypso, Norlethe trophy to Chris Gillingham, and Kismet trophy to Cereste. With much anticipation amongst contenders for the Concours awards a surprise fourth category was added this year for Spirit of Tradition boats, reflecting the breadth and excellence of the entries. Each of the Concours d’Elegance winners was given an engraved glass keeper prize and bottles of Joseph Perrier Champagne. The four Concours winners were:

Each Hamble Classics reveals some special stories but few could match that of Mabel, built by A. H. Moody & Son at the top of the River Hamble in 1966 to the design of the great Kim Holman. Last weekend she returned to the River Hamble for the first time since then. Originally named Mabel Amelia, her owner Bruce Thorogood and his crew sailed her up from Plymouth to the Royal Southern Yacht Club where she was reunited with a member of the club whose father was the second owner, and he had not seen the boat for over forty years.

To complete the pilgrimage, Mabel, along with another Moody returnee, the fabulous 1939 Fred Shepherd designed Amokura, owned by Paul Moxon, motored together up the river on Sunday evening before heading westward to get home before the weather broke.