Moray McPhail brings years of experience and understanding to some common problems associated with the gaff rig – and, specifically, the saddle

Every so often I get an email describing how a gaff saddle I’ve made isn’t working properly – usually because it is trying to shuffle round to the wrong side of the mast, but occasionally because it droops or capsizes during hoisting or lowering the sail.

I think the first thing to say is that saddles aren’t malignant. They don’t misbehave on their own account – it’s because they are being forced into it.

To start with, let’s think about the going around the front of the mast version of things, which comes from either too much thrust down the gaff, or the thrust being applied off centre, or both.

What determines the amount of thrust along the gaff? That will come from the way the peak halyard acts on the gaff. At the risk of stating the obvious, the purpose of the peak halyard is primarily to alter the angle of the gaff such that the leech of the sail is correctly tensioned. With a bit of tweaking you can also alter the belly of the sail. Except on the smallest craft, the peak halyard will be a multi- part purchase (2,3 or 4 to 1) which connects to the mast by way of a number of usually single blocks, and to the gaff by blocks running on a span of flexible wire.

The picture shows the idea. To do the job of adjusting the angle of the gaff, the peak halyard should be at roughly right angles to the gaff, and you can see this applies to craft such as Colin Archers and American catboats shown below. 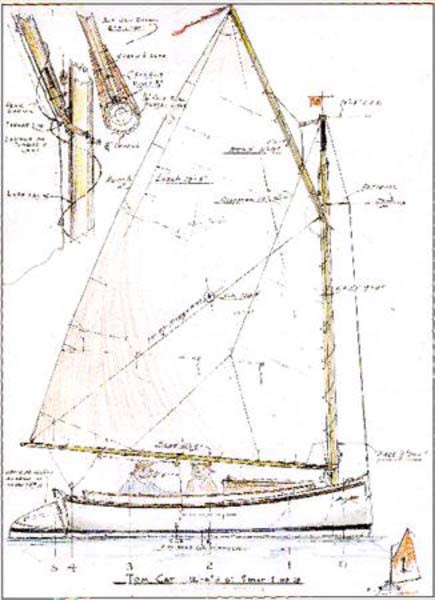 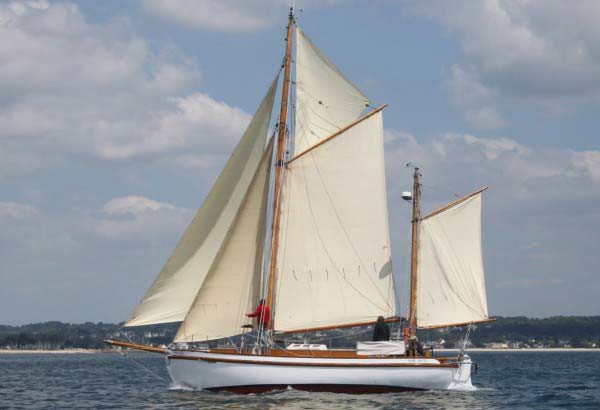 Where it comes unstuck is where there isn’t much height of mainmast above the hounds for the peak blocks, shown schematically and actually below. 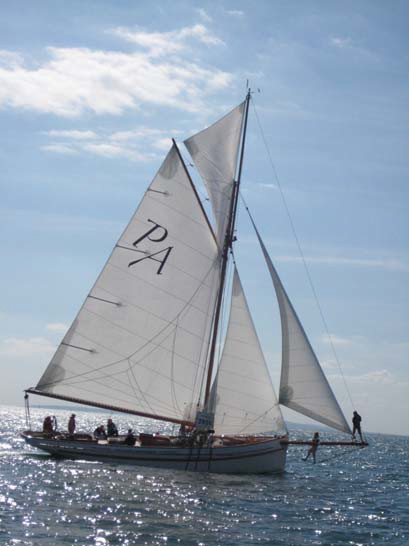 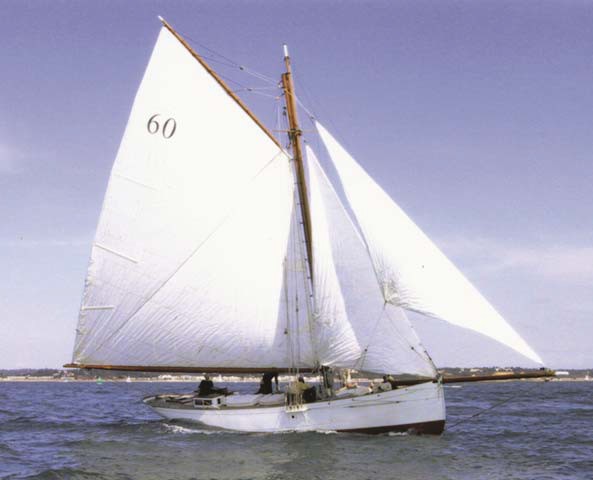 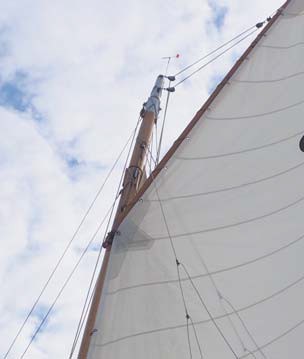 Now none of this would matter too much if the load were always applied straight down the gaff into the mast. The snag is that quite often it isn’t, and the usual reason for that is that the saddle is too big.

I usually allow 15% extra on mast diameter for the uncovered saddle just to stop it jamming while hoisting and lowering, and if the mast is the same diameter all the way up this usually proves to be OK. But when the mast is tapered, if the saddle stows OK at the gooseneck, then it will be too big in its operating position, and a load coming down the gaff will be off centre; trying to shove the saddle forward of the mast.

Over a period of time the saddle can be forced to open up, and so the problem gets progressively worse.

You can see this has happened in the example below. 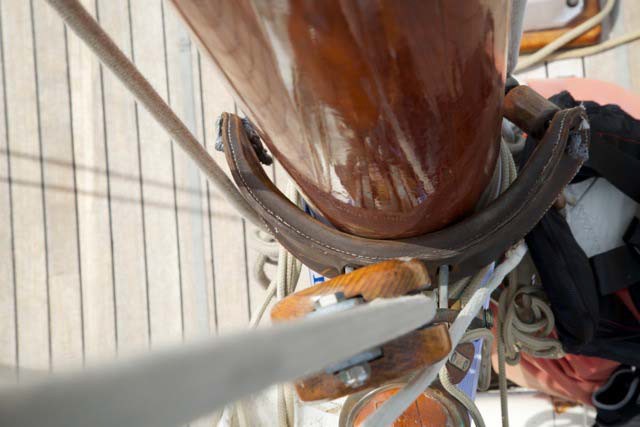 Saddle too open in its position 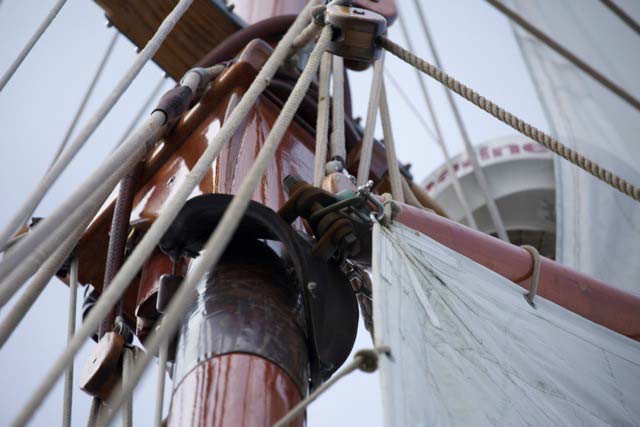 Saddle rotated around the mast

Sometimes you get the comment that it happens more on one tack than the other, and here the likely culprit is the throat halyard. The saddle needs to rotate around the mast and if it is restricted by the throat tackle, then that will set the saddle off to one side, and the thrust down the gaff will be unfair. In the example above you can see the throat blocks are quite close together and won’t have helped the situation.

But it is also possible to have too little thrust down the gaff, and this gives rise to the problem of the saddle drooping or capsizing while raising or lowering sail. In a very few cases the offset of the throat blocks from the mast keeps the saddle away. On my own boat I have a span the full length of the gaff, which though it is good in many ways, had two unfortunate side effects. Firstly there wasn’t enough thrust when raising sail and the saddle would double back underneath the gaff, and secondly the whole gaff could upskittle (saddle end up, peak down) if the span shackle ran to the saddle end. Both these were fixed by a small stop on the span itself which limited the travel of the span shackle.

So the main points are:

• Ensure the gaff is the right size and shape for when it is in its operating position. If you have a tapered mast, you may have to compromise a bit here, but a bit of tightness at the gooseneck is preferable to too much slack higher up.

• Adjust the shape and position of the spans and peak blocks to increase or reduce the thrust down the gaff. I always advise people not to go firm on the dispostion of spans until they have had a chance to see how it all behaves

• If your saddle misbehaves, the fault almost certainly lies elsewhere in the rig. (Or alternatively, don’t blame me!)