Part of Brixham’s heritage fleet is to be sold after The Trinity Sailing Foundation, a charity which has taken thousands of disadvantaged people to sea for 20 years, announced it has to cease current operations and redefine its mission.

The Brixham-based charity’s three historic vessels — Leader (1892), Provident (1924) above, and Golden Vanity (1908) — will be sold  after the charity said that changing conditions in recent years  mean its previous operating model is no longer viable.

“We’ve been able to provide sail training with the help of grants and bursaries from a number of charities,” Lara Bonney, Operations Manager, said. “But a significant number of those have told us they are closing down in 2020 and we cannot raise our fees enough to run the fleet as it is.” Trinity has taken an average 300 young people to sea every year and for many it is a life-changing experience.

Staff at Trinity’s offices are being reduced from four to one and one full time skipper is being retained (out of a normal two), but the charity confirmed there are no redundancies. The hope is that new owners of the vessels might want to keep them in Brixham – so that the charity could continue, in a smaller way, to offer sail training locally. 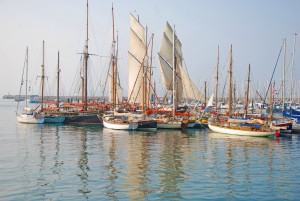 Brixham’s Heritage Quay, which was created in the early 2000s with the help of European grants, boasts five of the best known boats on the National Historic Ships’ register. The other two ex-Brixham trawlers – Pilgrim (1895), and Vigilance (1926) are so far unaffected by the news from Trinity, but there are concerns that if boats leave then the port will lose some of its attractive heritage identity. 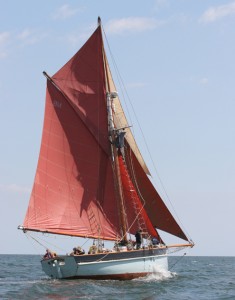 Golden Vanity once belonged to the marine artist Arthur Briscoe

Nick Reilly, Chairman of the Trustees, said: “Although this is a regrettable decision after 20 years of providing invaluable and often life-changing experiences to thousands of disadvantaged young people and — at the same time — maintaining and operating some of the most important heritage sailing vessels in the UK we had to recognise the current realities and take decisions in time to avoid future problems.

“Changing circumstances, over recent years, have led to the model that was so successful in the past being no longer viable. Grant-making charitable trusts — faced with problems of their own — have had to reduce the number and size of their donations leaving Trinity to significantly increase their bursaries. Also the organisations who look after the young people who go sailing on the vessels have had their own budgets cut, or eliminated. Our vessels get older each year requiring significant refit work over the winter after a rigorous sailing season.

“In order not to allow the charity to risk developing a serious financial situation, the Trustees have determined that the responsible decision now is to stop ongoing activities and find a new home for the vessels . With the expected surplus funds remaining, the Charity intends to continue to provide support, in one way or another, to disadvantaged young people.” 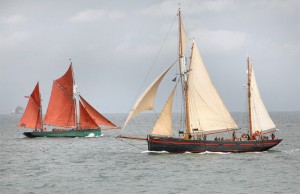 Provident and Leader sailing in 2014

Mr Reilly paid tribute to the office team and crew members, past and present, who worked hard for the charity over the years. “They, along with a hard-working army of volunteers, have all made Trinity Sailing what it is and whose enthusiasm has helped so many young disadvantaged people over the last two decades,” he said.

“Special thanks need to go to the organisations who have entrusted their young people with our team, who have consistently let us know about both the short and longer term benefits to these people who needed help. There are many other people, organisations and volunteers who have provided support in many ways who deserve thanks. All the above should feel proud of the results they have helped us to achieve.

“Finally, I would like to thank the Trustees. Most of them have been in place for many years and given their time, experience and professionalism to steer the charity in the right direction. In particular, a special thanks for the outstanding contribution made by the Founder of Trinity, Struan Coupar, who remains a Trustee, for his unstinting perseverance and belief.”

Main photo shows Provident and other traditional sailing boats at the Brixham Heritage Regatta in 2016. (Click images to enlarge.) 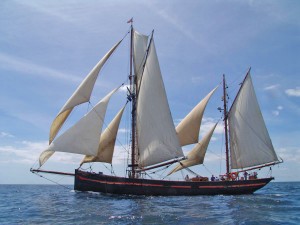 Girls learning the ropes aboard Leader 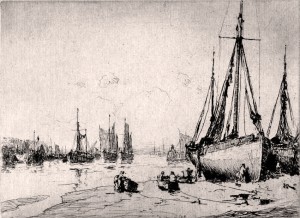