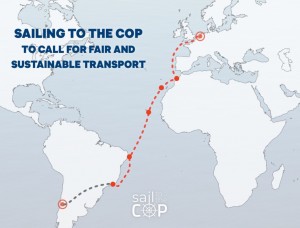 Track of the trip, see text for a position link

Greta Thunberg is not the only queen of the seas – when it comes to saving the planet by avoiding aeroplane flights. A group of 36  young climate change activists set sail from Amsterdam on Wednesday, October 2, for a two month voyage to South America, and on to Santiago in Chile for COP25 – the United Nations Climate Conference. The ‘Sail to the COP’ group have chartered Regina Maris, a 101ft (31m) LOA 1970 steel Dutch topsail schooner for the 5,000nM voyage, and it looks like they have a decent weather window for getting out of the Channel and south of Ushant by next week.

The activists, from all across Europe, are hoping to use the seven week voyage to brainstorm ideas for greener transport which they then intend to present to   world governments meeting in Santiago from 2 – 13 December. But they will also be helping the six permanent crew to sail Regina Maris. Living in four person cabins they plan to eat vegan meals. The voyage has scheduled stops at Casablanca, Tenerife, Cape Verde and Recife to pick up fresh fruit and vegetables and get ashore for a few hours. When they arrive in Rio they will take a bus across the South American continent to Chile – a distance of some 3,000 kilmetres. 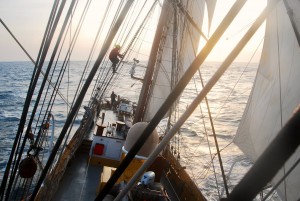 The group include three young women from the UK: Jacinta Hamley 22, Natalie Craig 27 and Tori Tsui, 25. The 36 have been sponsored by various institutions across Europe, including universities, with Tori being sponsored by Stella McCartney. You can read bios on all the activists: HERE

The group’s message is to reduce the carbon cost of flights – which are set to increase in number despite the desire across several governments, to reach carbon neutrality by 2050. Jeppe Bijker, one of four Dutch initiators of the Sail to the COP project, told reporters he did not expect people to give up flying altogether. “But we do ask that they think about why they are flying. You should ask yourself do you really need to go? Maybe it’s a business flight … and there could be an e-conference instead. And do you need to take so many short-haul trips?”.

They are also asking government’s to raise a fair tax on aviation and on fuel especially, and to promote more sustainable ways of travel: on trains, buses and boats.

After Chile some of the group plan to stay in the Americas and sail home with Regina Maris next year; others are booking passages home
on cargo ships – seen as a much more sustainable way to travel, if you can’t sail. 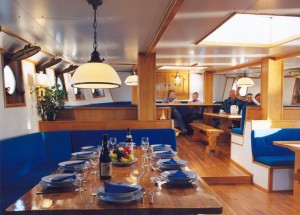 Meals are convivial times at sea. It will be a vegan diet

The group’s voyage is a big contrast to Greta Thunberg’s two week passage to the one-day UN Climate Action Summit in New York in September, see our report here. And Regina Maris has engines, so she will be able to arrive on time even if the doldrums are bad. Track the ship: HERE

Greta meanwhile has stayed in the US, after her blistering speech in New York and has been in Canada this week going whale watching in Quebec among other activities. She posted on facebook: “So happy to say that in the following weeks I’ll travel slowly through the North American continent, moving southwest and then eventually through South America towards Santiago. I will stop on the way and visit as many places as I can, and of course protest every Friday no matter where I am!” She planned to join the #climatestrike in Iowa City, today. Greta recently said that so far she has not decided on how best to return to Sweden when COP25 ends.