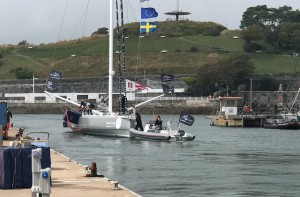 Greta, who has never sailed offshore before, famously refuses to fly, citing carbon emmissions by jet aeroplane as one of the more significant causes of increasing CO2 in the earth’s atmosphere. She arrived in Plymouth a couple of days ago and the crew of the Malizia II have been taking her sailing – to get used to seasickness. “I felt sick for about two minutes and then I was OK,” she was reported to say.

Greta has started a worldwide movement of Friday school strikes by children to bring notice to the impending climate crisis as world temperatures reach figures unknown since records began, and with unprecedented rates of rise. Greta’s message is to follow the science in the climate debate.

At a recent speech in Paris at the French Parliament in the Assemblée Nationale she asked climate change deniers to refer to p108, chapter two in the latest IPCC (Intergovernmental Panel on Climate Change) report . “Right there you will find our remaining carbon dioxide budget. If we are to have a 67% chance of limiting the global temperature rise to below 1.5 degrees then on January 1 2018 we had 420 gigatonnes of CO2 left in our budget. And of course that number is lower today – we emit about 42 gigatonnes of CO2 every year [a gigatonne is equal to one billion tonnes]. That remaining budget at current levels is gone in 8.5 years. These numbers are as real as it gets and are accepted by all nations through the IPCC. But not once have I heard a politician, journalist or business leader even mention these numbers – it is almost as though you don’t know they exist.”

See a clip of that speech below 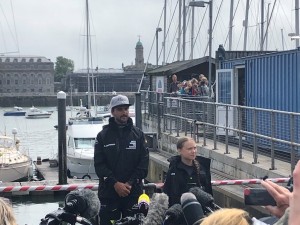 Greta’s departure (in F5 winds) was supported by several children from Devon and Cornwall and families keen to wish her well. But asked if she would try to convince President Trump of the urgency of the problem she coolly said no; she views the Trump presidency as a lost cause in that respect.

Skippers Pierre Casiraghi and Boris Herrmann of Team Malizia are hoping that the 3,000nM voyage will only take two weeks. Sailing across the Atlantic in August, against the prevailing winds, is an adventure, they say. For green credentials the high-tech foiling yacht is equipped with solar panels and underwater turbines to generate electricity during the journey (the onboard engine will only be used in emergencies). Torqeedo-powered electric boats assisted Team Malizia with docking, towing, passenger transport and general harbour support that would typically be provided by combustion-powered boats. With good reason: Switching to electric drives reduces CO2 by up to 95% (depending on the vessel’s usage pattern and the source of the electricity used for charging).

According to the non-profit Atmosfair, a round trip between the UK to New York by aeroplane contributes approximately 3.4 metric tons of CO2 to the atmosphere, per passenger. Eurostat suggests that’s almost 50% of the average yearly carbon footprint per person in the EU (7.2 tons). While avoiding air travel is a powerful way to reduce carbon emissions, marine combustion engines also emit high levels of nitrogen oxides, sulfur oxides and particulates. Driving a boat powered by a single 80-horsepower outboard for one hour emits pollution equivalent to more than 350 automobiles driving at highway speed for the same amount of time.

“Each day, up to 2,500 planes fly across the Atlantic. Of course, not every one of the tens of thousands of airline passengers can sail across the ocean instead. But, the zero-emission transatlantic crossing could help to change our perspective on when air travel really is necessary, and which options are technologically feasible,” comments Team Malizia.

Fair winds and safe passage to Greta. You can track her voyage: HERE 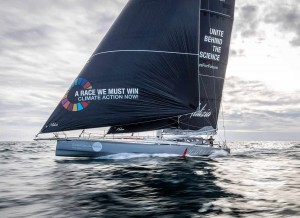