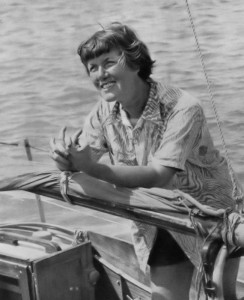 Felicity Ann – at the Northwest School of Wooden Boatbuilding

Ann Davison’s Felicity Ann, the 1949 Mashfords-built, 23-foot double ended wooden sloop she sailed across the Atlantic from Plymouth UK in 1952-53 has been restored in America. Davison’s feat, which propelled her into the record books as the first woman to sail solo across the Atlantic is immortalised in her classic book My Ship is so Small. And that ship has proved to have a degree of immortality as well.

Davison made landfall in Dominica 65 years ago this year and then proceeded to New York via the intra coastal seaway via the islands of the Caribbean. Five years afterwards, after occasional cruising to the Bahamas and back to NY she sold Felicity Ann to go on another adventure from the Great Lakes to the Gulf of Mexico. The boat was sold and trucked to California where she was sailed until the late 1970s before being discovered as a derelict in 1980. She then spent years as a restoration project, transferring to an Alaskan owner in 2000 before eventually being donated as a rebuilding project to the Northwest School of Wooden Boatbuilding.

Felicity Ann was at last given new life on May 3rd in Port Townsend, Washington after she was restored by students at the NSWB. The students’ restoration project marks a very positive page in Felicity Ann’s lengthy history book.

With a budget of just $60,000, Felicity Ann was pieced together and restored by hundreds of volunteers under the direction of Community Boat Project Director Captain Wayne Chimenti.

“What I love about this story was that she wasn’t rebuilt by professionals,” Chimenti said. “It was a restoration project. It was student labor led by patient instructors — all volunteers and non-professionals; hundreds of people who have touched and worked on this boat.”

The vessel is a double-ended hull with a traditional carvel plank-on-frame construction, the cast-iron keel is original but now boasts a purple heart center line, a sapele sheer strake and a mix of larch and red cedar planking.

Felicity Ann begins her new chapter as an educational vessel, and will boast an all-female crew. In June, she’ll embark on a  “Victory Lap” around the Salish Sea with an all-women crew, calling at numerous ports to share her “floating story.” The boat will be captained by the Community Boat Project’s Nahja Chimenti, with shoreside presentations by Shelly Randall. The voyage is generously sponsored by Kitsap Bank, whose long history in the region includes leadership by the first woman bank president west of the Mississippi. [View the Victory Lap schedule.]

Felicity Ann was one of three launch stories sent to us by Ellinor Waters from The Classic Yacht Owner’s Association (classicyachts.org). The others are:

The 91-foot SONNY III was launched at Brooklin Boat Yard earlier this month. She is a custom, cold-molded wooden sloop constructed by Rockport Marine and is a collaboration between Bruce Johnson and the BBY Design Office. SONNY III is designed for high-performance cruising along coastal US waters. She features a completely flush deck and twin cockpits, one as the center for social interaction and the other for all sail handling. 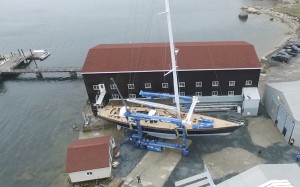 “We are very pleased to be building a third boat for this customer.  He’s a very experienced yachtsman who is a pleasure to collaborate with,” said Steve White, president of Brooklin Boat Yard. “His interest in sailing performance is equaled only by that of designers and builders.”

“The interior layout includes a crew cabin forward with private head and stall shower, two guest staterooms forward of the mast, one with ensuite head and stall shower and the other with a day head, also with separate shower. The main salon includes an elliptical dining area, a pair of reclining chairs and a navigation station,” read Brooklin’s plans on SONNY III. “Access to the full-beam master stateroom is either through the port side passageway or through the generous galley to starboard. The master stateroom includes an ensuite head with stall shower. A utility/laundry room is accessed from the port side passageway. The interior will be finished in Herreshoff style with white and cream paintwork offset by American cherry joinery, leather upholstery and a teak and maple cabin sole.”

After 18 months of construction, the Brooklin design team is extremely proud to have SONNY III in the water for the summer.

Work on ANNA began in 2016, but the vision for her has been in existence for 18 years. With Magnolia flowers tied to her bow, in honor of her home port, the 65-foot classic launched April 9th at Lyman Morse in Thomaston, Maine. Commissioned by a couple from Charleston, SC, ANNA is meant for day cruising along the East Coast and Caribbean. ANNA is classic 19th century style, so designer Bob Stephens looked to famous designers of traditional boats for inspiration. 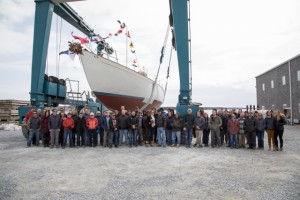 The Lyman-Morse crew with the proud owners. © Alison Langley

“A project as special as this one doesn’t come along every year,” said Stephens of Stephens Waring Yacht Design. “I’ve done half-dozen projects of this level in 30 years.”

Her hull is cold-molded over Douglas Fir frames with a teak planked deck. The boat’s interior is the work of designer Martha Coolidge and includes a galley, two heads, a master stateroom, and crew quarters for the captain and first mate.

Launching a boat is a big occasion! Let like-minded people know! Email a few details and a photo or two to editor@classicsailor.com