Errol Flynn, the Cruise of the Zaca

In 1952 the Hollywood actor Erroll Flynn took a group of scientists from the Scripps Institution of Oceanography on an expedition south of California and through the Panama canal to the Caribbean, collecting samples for scientific research aboard his schooner, the Zaca.

Zaca was a timber hulled auxilliary two-masted schooner of 122 tons and 118ft (36m) length overall. Built of Alaska cedar and teak she was designed by Garland Rotch and completed in 1930 at Sausalito, California, by the Nunes Brothers Boat and Ways Company. She was built for Templeton Crocker a millionaire railroad heir who hired Rotch to be her captain on her maiden voyage – which was a one year circumnavigation from the West Coast of the United States! She was also used for research however and Crocker was a marine biology enthusiast who went on to complete a further circumnavigation. Some credit Zaca’s scientific voyages as having discovered 2,000 new species.

Her early yachting life came to an end with the bombing of Pearl Harbour and in 1942 she was sold to the US Navy where she saw war service as a guard vessel in San Francisco harbour, painted gray and fitted with 20mm guns with a compliment of 35 crew.

Flynn bought her in 1946 when she was in a tired state. The actor, famous for his swashbuckling roles such as Captain Blood or the Adventures of Robin Hood, restored Zaca at an estimated cost of $80,000 and sailed her in between his film schedules. She was used by Orson Welles for the film noir Lady from Shanghai in 1947 and by all accounts the parties aboard were spectacular! Flynn made his own scientific voyage in 1952 and in 1954 sailed Zaca to the Mediterranean where he kept her, at Mallorca. However his lavish lifestyle was apparently outstripping his earnings and, in 1959 he was in British Columbia negotiating to lease Zaca to the Canadian businessman George Caldough when he complained of severe pain in the back and legs. Despite treatment he fell unconscious and died after being taken to Vancouver Hospital. He was 50.

For Zaca, based in the Med the good times were over as well. After Flynn’s death she fell into disrepair and was taken to the French riviera where her fittings were stolen until she was regarded as a rotting hulk in Villefranche. At one stage the locals arranged for a double exorcism by both Anglican and Catholic priests after repeated reports of music, women’s laughter, lights and even Flynn himself being seen and heard aboard. That was in 1979 and it would be ten more years during which she sank at least once, before the Monaco-based sailor and businessman Robert Memmo acquired her in 1990. Memmo brought together many of the best shipwrights and craftsmen to the IMS shipyard in Saint-Mandrier-sur-Mer, near Toulon, France, for a spectacular restoration that lasted 18 months. She was relaunched in 1994 and has been regarded as one of the most spectacular yachts in the Mediterranean.

Below is an excerpt from Luther Green’s 51 minute documentary In the Wake of Zaca, with the schooner in Villefranche in 1983.

Tasmanian Devil is a documentary narrated by the late Christopher Lee on Flynn in 2006. 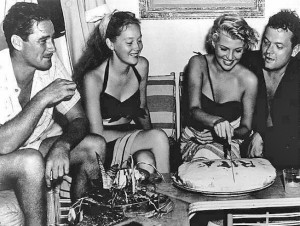 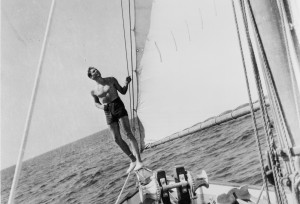 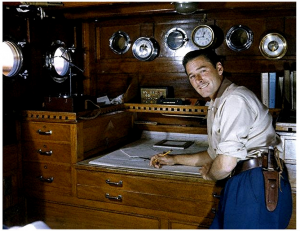 Zaca makes the headlines for an exorcism in 1979