My she was yar

On the eastern seaboard of the United States a boat is said to be yar (or yare pronounced yar) when she is well balanced on the helm, quick and handy. This clip is from the 1940 classic film Philadelphia Story where a mesmerising Katherine Hepburn plays Tracy Lord, as a socialite who has split from her boat designer husband Dexter Haven (Cary Grant) and is about to marry wealthy George Kittredge (played by John Howard) – though she also has a love interest with Macaulay Connor (played by James Stewart). Amidst the three-way confusion she is given a model of a schooner her former husband designed and built and which they had sailed together, as a wedding present. The boat’s name is the True Love and Tracy finds that compared to it – she was not very yar, at all in her marriage and with all four actors giving stellar performances the film (which is nothing about sailing) delightfully carries on to a surprising reprise.

Yar turns up again when Dexter  asks for an acknowledgment for his wedding present (the symbol of their previous relationship), and Tracy becomes concerned that he is thinking of selling the boat:

Tracy: It was beautiful – and sweet, Dex.

Dexter: Yes, yes. She was quite a boat, the True Love, wasn’t she?
Tracy: Was, and is.
Dexter: My, she was yar.
Tracy: She was yar alright. I wasn’t, was I?
Dexter: Not very. Oh, you were good at the bright work, though.
Tracy: I made her shine. Where is she now?
Dexter: I’m gonna sell it to Ruth Watrous.
Tracy: You’re gonna sell the True Love, for money?
Dexter: Sure…Oh well, what’s it matter? When you’re through with a boat, you’re through. Besides, it was only comfortable for two people. Unless you want her.
Tracy: No, no I don’t want her.
Dexter: Well, I’m designing another one anyway, along more practical lines.
Tracy: What’ll you call her?
Dexter: I thought the True Love II. What do you think?
Tracy: Dexter, if you call any boat that, I promise you I’ll blow you and it out of the water. I’ll tell you what you can call her if you like…in fond remembrance of me, the Easy Virtue.
Dexter: Shut up, Red! I can’t have you thinking things like that about yourself.
Tracy: Well, what am I supposed to think when I – Oh I don’t know. I don’t know anything any more.
Dexter: That sounds very hopeful, Red. That sounds just fine.

The True Love of the film is based on a John Alden schooner of the same name which is still sailing today. In 1926 Alden, one of America’s best known yacht designers, designed the seventh of his famous Malabar series of schooners. Malabar VII had six sister ships all built in 1926 or 1927, the third of which was Venona II, later renamed True Love. With a LOA of 53ft 9in (16.4m), Beam: 12ft 5in (3.8m) and draught of 7ft 3in (2.2m) she was built by the Pendleton Brothers Shipyard in Wiscasset, Maine. Alden reportedly didn’t think the Malabar VII design was fast (except on a reach) but the design proved itself when Malabar VII won the 1926 Newport Bermuda race with him at the helm. Venona II (True Love) has a different rig from Malabar VII with a bermuda rigged mainsail and gaff fores’l. In the early 1930s she was taken to Los Angeles, California, where she was reportedly bought by actor Dana Andrews. She was converted to a cutter and later renamed True Love. After the model of her appeared in Philadelphia she was used for the 1956 movie High Society with Bing Crosby starring as her skipper alongside Grace Kelly – with a famous scene where Bing serenades Kelly aboard with a Cole Porter song called True Love. 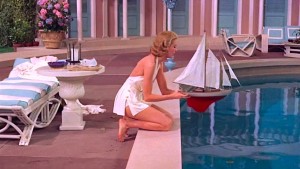 She later moved to St Thomas in the Virgin Islands before being restored in 2003 and taken to be a charter vessel on Seneca – one of the lakes in the beautiful Finger Lakes region of the Great Lakes, USA. 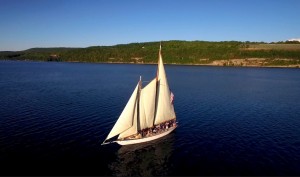