Jean-Luc Van Den Heede has won the Golden Globe Race, crossing the finishing line at 1013hrs GMT this morning after a 30,000 nM race which saw him rolled and having to round Cape Horn with a damaged rig, writes Dan Houston. 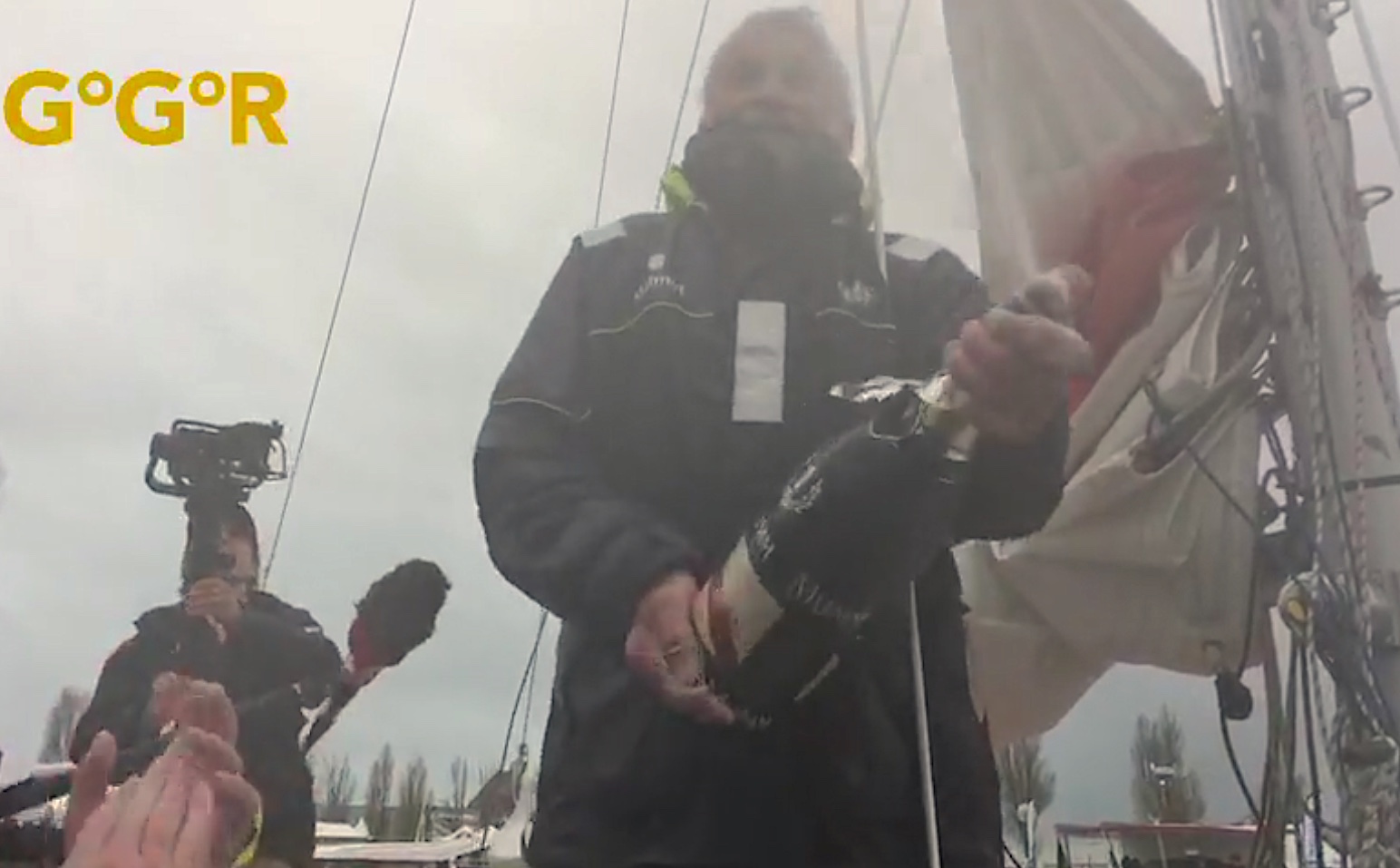 Champagne and fans on the dock

The 73 year old veteran of five (now six!) circumnavigations was returning to his home port of Les Sables D’Olonne in Britanny from where the 18 hopeful entrants in this second edition of the Golden Globe – the first was in 1968/69 – set out on July 1st last year. Jean-Luc was greeted by a fleet of press and well-wisher boats including his wife Odile who jumped aboard Matmut to hug him shortly after he crossed the finish line, and less than a minute after he’d dowsed his spinnaker!

Matmut then continued under sail into the harbour; Jean-Luc having used the last of his alotment of diesel sometime before. He’d been offered fuel but felt that bleeding it through the engine would be more trouble than it was worth. Les Sables provided the most ecstatic welcome for the French hero of sailing with crowds lining the quays and cheering him in. Robin Knox-Johnston on the Golden Globe Race boat, with organiser Don McIntyre looked slightly wistful as he spoke of the great achievement – and perhaps remembered his own return to the UK on 22 April 1969 after 312 days at sea. A group of schoolchildren, enthusiastically enjoying not being in school on a Tuesday morning cheered Sir Robin and Jean-Luc with equal gusto as the two great sailors – winners of the first and second Golden Globe races, with a 50 year hiatus between them, sailed upriver.

Jean-Luc has taken 100 days off RKJ’s time with his Rustler 36 which he bought, specifically for this race, in August 2015. After some sea trials he completely refitted Matmut cutting 7ft off her mast, which may have helped save the rig when he was rolled to 150º by a freak wave on November 5, 1900 miles west of Cape Horn. Jean-Luc thought he would have to abandon the race after the mast was damaged and was moved temporarily into Chichester Class when he used his satellite phone to call his wife. After repairing the rig (he went up the mast half a dozen times to repair the damaged lower shroud plate) he asked for a time penalty to be served (of 18 hours) and to continue racing. This was agreed and Jean-Luc rounded Cape Horn a week or two later (November 23). 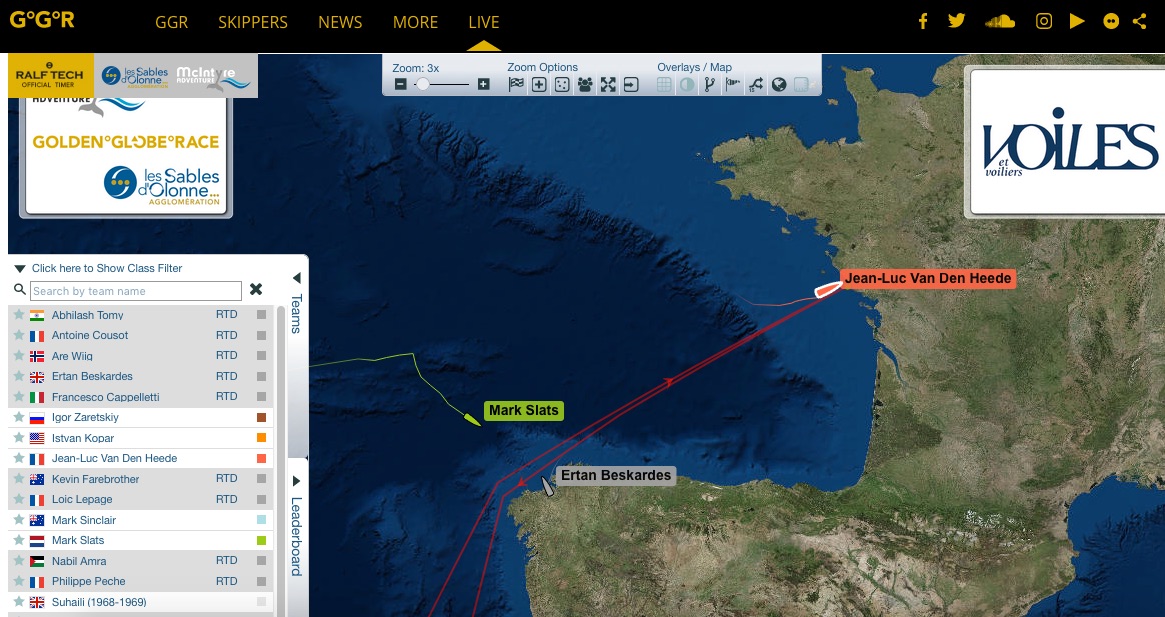 From January 29 0600hrs :  Jean-Luc closes the coast while Slats diverts to the south to avoid a storm

After he had tied up Matmut Jean-Luc gave an impromtu press conference, immediately explaining the repairs he had had to make to his mast, before getting to the stage at quarter to eleven (GMT). Sir Robin, 79, handed the 73-year old a bottle of Champagne joshing: “You’ve stolen my record, until you crossed the line I was the oldest person to do a solo round the world race. Now you are!”

There had been many comments about how smart Matmut looked, with barely a streak of rust and with her sails looking in superb condition. Nor, as she rolled in the swell, could you see any barnacles or weed growth; her smart black antifoul also looked in superb condition. Hull growth has dogged other competitors but there has been a rumour, unsubstantiated as yet, that Jean-Luc’s secret is adding a good dose of chilli powder to the antifoul paint; whatever he uses – it seems to work! He also looked good himself, bursting into song at one point, and stood with hardly a sway to his balance and spoke with enthusiasm for the race and for his hero RKJ, who was also on stage as the man who first proved that it was indeed possible, to sail alone around the world, south of the great capes, and with minimal outside assistance.

Jean-Luc arrived just before some bad weather; a storm in Biscay has meant that Mark Slats, 300 miles astern of the Frenchman, has diverted his course to the south and spent the night and much of today (Tuesday) headed for La Corunna to outrun the storm on the advice of his team and the Dutch and Falmouth Coastguards. Slats used his satellite phone to ascertain the weather conditions, rather than go via race control and as this breaks the rules of the race he will be given a time penalty in the same way that Jean-Luc had when he also used the phone after his knock down. Since lunchtime he has changed direction and is now heading ENE on a course towards the finish line. He’s clearly hoping to stay behind the storm today and make the most of better winds tomorrow and on Thursday to outrun the next strong winds coming into Biscay.

The superb reception in Les Sables confirms this race as another global sailing event that will be owned by the French. This wasn’t the first wish of the organisers who first went to Falmouth to see if they could get some help organising it from there. With costs rising (£250k was mentioned at one point) they then tried Plymouth. But despite initial enthusisam it soon became clear that Plymouth saw it as a way to raise money as well; organiser Don McIntyre found a better reception from the French who understand that these events can actually bring money into a town through tourism and media coverage rather than asking organisers and sailors. The next GGR event, in 2022 will be French dominated as it celebrates Bernard Moitessier and Joshua.

Photo: Matmut a few seconds after crossing the line

After another tough night at sea the septuagenarian veteran solo sailor Jean-Luc Van Den Heede crossed the 100-fathom line marking the continental shelf 100 or so miles from the Britanny Coast this morning on a broad reach looking to cross the finish line, at Les Sables D’Olonne tomorrow morning. The rig of the Frenchman’s Rustler 36 Matmut was damaged when she was rolled to 150º in stormy seas west of Cape Horn on November 5. But repairs have held up and last night’s 45 knot winds and 7 metres seas seem only served to extend his lead over rival, Dutchman Mark Slats, also sailing a Rustler 36 Ophen Maverick.

A few days ago Slats appeared to be catching VDH – at one time he was just 30nM behind in terms of their boats’ distances from the finishing line. But the Frenchman had sailed north of the Azores to get more favourable winds and the tactic paid off. Bar some catastrophe it looks like Matmut will cross the finishing line at around 9am (French time) tomorrow – thousands of fans of this endurance race will turn out to see him in. He will have taken 100 days off Sir Robin Knox Johnston’s time, sailing in Suhaili during the first Golden Globe Race fifty years ago in 1968/9.

There are more strong winds expected tomorrow but currrently it looks as if VDH will sail into harbour in front of them. Slats will expect this next gale soon as well, with just 427nM left to go at noon (GMT) today he should be in on Thursday evening.

The two frontrunners have extended a huge lead over the remaining three (out of an original 18) competitors. Uku Randmaa, from Estonia in his Rustler 36 One and All is currently 3,580 nM behind and still 500 miles south of the equator. American/Hungarian Istvan Kopar sailing his Tradewind 35 Puffin, is 500 miles to the south of him while the Fin Tapio Lehtinen is still in the Southern Ocean around 850 miles west of Cape Horn in his Gaia 36 Asteria. 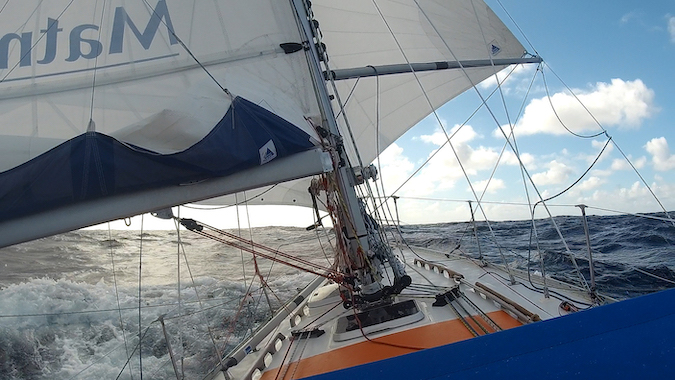 The finishing stages will be relayed on the race’s Facebook Page www.facebook.com/goldengloberace/