An installation artwork using lines of light predicts the effect of sea level rises at an arts centre on North Uist in Scotland’s Outer Hebrides islands. The installation uses LED sensors running lines across buildings and the landscape to show how much of the land would be underwater if sea levels rise in the way that is currently being predicted. It’s by two Finnish artists, Pekka Niittyvirta & Timo Aho, and is titled simply: Lines (57° 59′ N, 7° 16’W).

The project, which is supported by Finland’s Arts Promotion Centre is designed to “explore the catastrophic impact of our relationship with nature and its long term effects,” say the artists, who installed it last summer. It highlights the effects of rising water levels on buildings of the Taigh Chearsabhagh Museum & Arts Centre on North Uist. It dramatically shows how coastal communities worldwide will be affected by sea level rise and how planners need to consider it as part of future developments.

The installation reflects some of the more disastrous recent predictions, which suggest rises in sea levels of 1.4m or more by 2100. A 2014 report by the Intergovernmental Panel on Climate Change projects rises of 60cm for the same period, but many scientists now believe that figure will almost certainly rise, and could double when the IPCC’s next report is due in 2021. 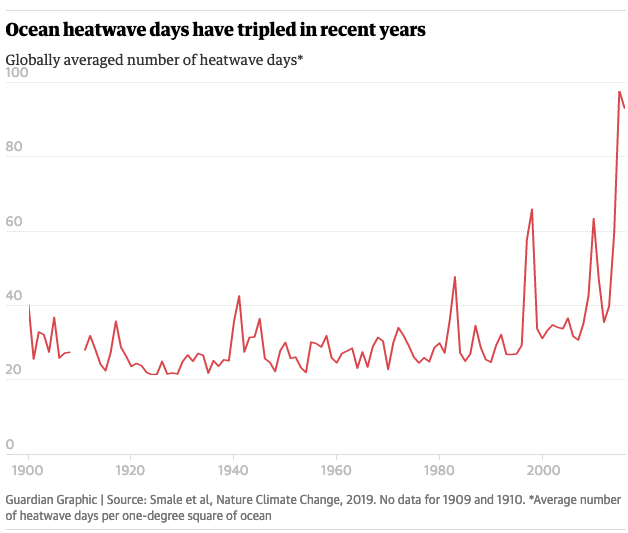 No one denies that sea levels are rising, but so far the effects have not been as great as those predicted with global temperature rises of 1.5ºC+ (the figure espoused by the Paris Agreement on Climate Change in 2015). Sea levels have risen 30cm on America’s eastern seaboard, for instance, in the last 120 years.

Global sea level rises occur as ice melts when the oceans heat up. And a recent report highlights ocean heatwaves as being as significant in terms of their destructive capability as those on land. Data shows the number of heatwave days in the oceans tripling since the 1970s as global warming gradually heats up the sea. Coral reef decline is already well documented with kelp meadows also being badly affected. Search ocean heatwaves or see the Guardian’s in depth report: HERE