The 1905 Bristol Channel Pilot Cutter Frolic is due to be cut up and destroyed in the next few days unless someone comes forward to rescue her. Frolic is lying at an island near Bergen in Norway and is in need of a total rebuild. Despite initial interest following our report HERE  several efforts to raise interest and cash have failed and the Norwegians in charge of her have been tasked with clearing the site where she lies.

This afternoon Will Loram, who has tried to raise Welsh interest in Frolic, received the following message from Atle Sundal acting for her owner in Norway:

“I am afraid that the time has passed now. The new owner wants Frolic away. We’ll have to pay about NOK 30.000 (£2,750) to cut Frolic up. Will it help you if this money instead can go to you as a part of the cost for transporting Frolic to England or Wales?

Any decision must be made very fast. I need a final answer this week.”

Frolic was built at the pinnacle of development and design of the sailing cutter that operated in some of the busiest and most dangerous waters at the beginning of the 20th century, when coal was king, and ships ran on steam from coal mined from the South Wales Coal Field.

To rescue her from her lonely jetty near Bergen, Norway, you only need a purchase price of NK1/£1/$1. However the rebuild price…well that’s another story. 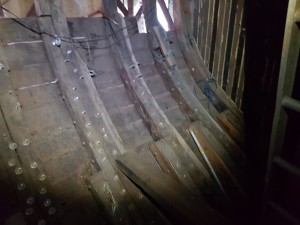 Some work was done on her rebuild, but much will have to be redone

But she could be a project for someone with a sense of history, a vision of return to glory, and deep pockets. We have discovered that she could be containerised with her counter cut off. And she could be stored like that until her future was mapped out. A plan to visit her and take her lines has been shelved.

Threat of the chainsaw has hung over her since 30 January, and 2 rescue attempts have sunk beneath the waves. Unless someone acts fast, Frolic and her history will be lost for ever.