OSTAR is still from Plymouth

Many pages are reporting on the disappointing news that The Transat has moved its race start from Plymouth to Brest stating the loss of 60 years of ocean racing from the city. However, they are failing to report that the OSTAR (see Facebook page… Ostar and Twostar) is the ORIGINAL Transatlantic race which will start from Plymouth in 2020 in the true spirit of Corinthian sailing. The Transat being reported on is the newer offshore race for professional sailors that started from Plymouth in 2004 when the Royal Western YC decided it could no longer afford the cost or responsibility of running a ‘Grand Prix’ type event for the larger, one-design, highly sponsored and professionally skippered boats. The RWYC selected a commercial events organisation, based in France, to run this part of the race. They then continued to run the OSTAR,  for professional and experienced skippers alike – sailing any class of boat, especially the smaller boats which had by then been barred from the Transat races. The OSTAR is run as the Corinthian event envisaged by the original founder of the race Blondie Hasler and the other competitors sixty years ago.

Heidi Frith – PR for the OSTAR  said: “I would just like to mention that we are the original OSTAR and we already have 10 competitors. In Plymouth we have huge plans to celebrate 60 years of oceanic short-handed sailing as well as the Mayflower 400 celebrations in 2020.”  The move of the newer Transat to Brest is disappointing for Plymouth as it deprives those skippers and the public that follows them of the opportunity to meet and share in the 60th anniversary of the OSTAR.
Among other organisations that reported the OSTAR’s British demise are the BBC, whose disappointingly innacurate news that covers the supposed move is here: https://www.bbc.co.uk/news/uk-england-devon-48348987

CS contacted the BBC’s local newsroom about this report, but there seemed little interest is correcting the story. 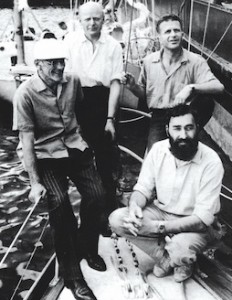 Just five yachts entered in the first Observer Singlehanded Trans-Atlantic Race in 1960. Their five pioneering skippers were the race founder and Royal Marines Cockleshell hero Blondie Hasler, sailing his 25ft Folkboat  Jester, Francis Chichester in the 40ft Gipsy Moth III , David Lewis in his 25ft Vertue Cardinal Vertue, Val Howells in his 25ft clinker Folkboat Eira and Jean Lacombe, the lone Frenchman, in the smallest boat – the 21ft Jean Jacques Herbulot designed cold moulded centre-boarder Cap Horn. The OSTAR – now called the Original Singlehanded Transatlantic Race was run every four years since 1960 until 1984 when it changed to the CSTAR and Europe 1STAR before being resurrected in 2005. It was also held in 2009 and 2013 and in 2017 where stormy conditions forced many competitors to retire (see CS report: HERE )

In 2020 The Royal Western Yacht Club of England will be celebrating sixty years in which the club introduced and then developed the sport of Short-Handed Oceanic Racing.

Main image shows the satellite positions of the entrants in the 2017 event.