An island in the stream

The West Mersea Oyster Dredging Match – Story and photos by John Worrall
Packing Shed Island, just off Mersea, has been key to the Essex oyster fishery for over a century. Now, with the revival of dredging for oysters under sail, it’s come into its own again.

As a link with the 19th-century peak of Essex oysters, Packing Shed Island is unadulterated. The recorded history of this low – and not particularly permanent – sliver of land in the channel off the southwestern point of Mersea Island is all about oysters with, as its focus, the eponymous – and only – building thereon. The Packing Shed dates from 1897 and has survived because it is raised on piles around which big springs lap and sometimes rage. A short-lived predecessor was removed by a storm and so nearly was the present shed itself in 1987. 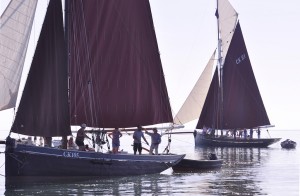 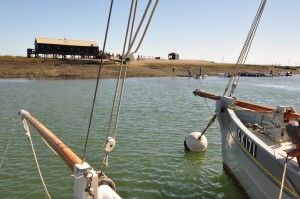 The building that gives Packing Shed Island its name…

Cast a careful eye along the island and the outlines of oyster pits become apparent, long unattended and now fudged by nature but testament to the time when Essex oysters were being shipped out by the barrel-full to London and Europe. And now, with enough time elapsed to make such heritage precious, the conservation urge, oozing like the very Blackwater mud among today’s generations, is making sure that the Shed at least remains. Refurbished from an almost skeletal condition in the 1990s, it might not pack oysters any more but it is available for functions and events which give it a reason to live on, although wellies are a good disembarkation strategy for patrons.
But then just as the conservation imperative has rescued the Shed, so it has conserved some of the smacks which once filled it with oysters. Back in the day, smacks – like any working boats – were worked and maintained until repair was uneconomic or they were lost, and replaced. The gradual introduction of engines in the first half of the 20th century meant that many sailing smacks became redundant before they were worn out, and some of these passed into increasingly loving hands with, like the Shed, another reason to live on.
Three or four dozen are reckoned still to be berthed in Essex, (perhaps twice as many again are scattered around the UK and Europe), and some have long been put to racing to keep them in shape. 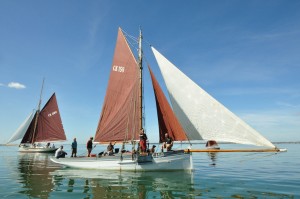 Dorothy, CK159, built in 1899, has been at West Mersea since 1997 when Paul Harding, MD of colchesteroysterfishery.com, and Rob Lee acquired her from her previous owner in Burnham-on-Crouch. She’s 37ft LOD, and, like Gracie, a small smack, built to dredge the creeks, though there is a story that in the early 1900s, she went around the south-west and up to west Scotland to go dredging.
She wasn’t the only one to do that and their skippers would have had to know their business as well as their boats, and even then would have had to pick the weather. But smack builders also knew their business, not least the Aldous yard at  Brightlingsea, generally regarded as the pre-eminent builders on the Colne and Blackwater. They built Dorothy and  many other smacks –  40 or so of theirs are still around – along with bawleys, yachts and anything else of a local flavour.
Dorothy was actually first owned at West Mersea and so for nearly a couple of decades now, she has been back home. 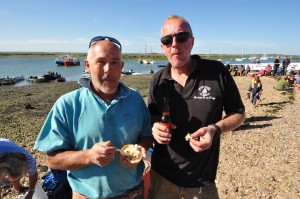 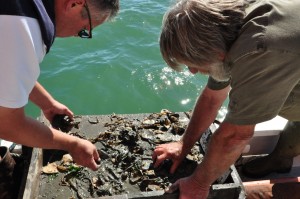 Except that eventually for some owners, even racing wasn’t enough and in the 90s, those owners decided on an annual event to revive and preserve the old skill of fishing under sail. In its first year, 1994, it was a trawling competition (but who ever trawled for oysters?) Thereafter, it became the Mersea Oyster Dredging Match.
The prime mover at the start was traditional sailing smack enthusiast Charles Harker, later assisted by oysterman William Baker who has now run the event for a decade or so. The aim these days is to promote the local commercial oyster fisheries and businesses and engage the community, celebrity chefs, shellfish industry representatives and shellfish policy makers.
And it’s all about the native flat oyster, ostrea edulis, on which the industry grew. Found in huge quantities in the creeks of the serrated Essex coast where water quality and nutrient levels were just right, edulis was cheap food, its consumption traceable back to Roman times. By the 19th century, it was nutrition for the masses: the Victorians put it in pies or sold it on street corners. A huge industry grew up around it: of 22.9 million oysters (2,250 tonnes) landed in the UK in 1914, 89% were from Essex and Kent.
But the 1960s brought the bonamia ostreae parasite, at about the time of the legendary winter of 62/63, reckoned by some to have weakened the stock and rendered it more susceptible to something which may already have been present. Bonamia tended to kill the oyster as it reached maturity in a process still not fully understood although most shellfish carry parasites of some sort which can become fatal to them if the system is weakened by something else. 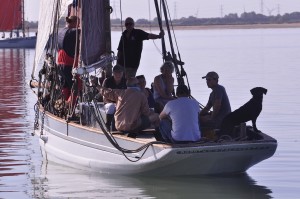 With edulis commercially non-viable for a long time, the industry turned to the Pacific oyster, crassostrea gigas which is not affected by bonamia and, although cultivated mainly on trestles, has now gone widely feral around the creeks. But edulis never went away completely and, with much nurturing – not least through the efforts of the Essex Native Oyster Restoration Initiative (NORI) – is making a commercial comeback.
And dredging under sail is back too – in the form of the annual Mersea Oyster Dredging Match. And its focus is Packing Shed Island. It’s a natural.
So again this year, on a gloriously sunny and warm day in September, nearly a dozen smacks went dredging, led by the Foreman Smack, appointed thus because she won last year’s main prize, the John Frost Trophy, for the smack handled and rigged in the most seamanlike and professional manner.
The foreman this year was Marie, CK21, built at Rowhedge on the Colne in 1886. On board were the West Mersea Mayor, Cllr Carl Poweling, and the Colchester Mayor, Cllr Julie Young, who jointly started the two-hour match by raising the foreman’s flag and casting the first dredge.
Classic Sailor was aboard the smack Gracie CK46. The original plan was to be on Dorothy CK159 but she was mob-handed for the day with barely room to swing a dredge because this event is a picnic trip for smacksmen with kids, dogs, everybody. Gracie, though, was out there with her racing crew – skipper/part owner Pinky Hughes with Mark Bailey and Daniel Hill – and although dredging is more about speculative towing than speed, Gracie looked good for silverware.
The rules for the day were that all contestants dredge in the same direction as the foreman smack and the judges’ boat was cruising around to make sure. But with no wind at all for the first half hour, despite encouraging ripples just down-channel, that was easier said than done.
Gracie got a bit of traction drifting with the ebb but her two dredges gleaned dead shell and mud and not much else. The strategy was short hauls and regular checks because oysters tend to accumulate in patches and while a long haul might have found some, it was important to know exactly where so that the particular patch could be worked properly.
It was after an hour and with the breeze stirring that Pinky struck oysters and, working over the spot a few times, began to fill the box on deck. It’s a deceptive creature, edulis, often attached to, and grown on, old shell, and being flat – relatively so compared to gigas at any rate – it could escape the notice of the unversed. But Pinky and crew were nothing if not versed, as demonstrated back on the island, because there they were awarded the John Frost Trophy. So Gracie will be Foreman Smack next year, for which Classic Sailor can modestly claim some credit, just for being aboard.
And then, as crews and passengers spread out their picnics, there was a competition to see who could open 20 oysters most quickly and cleanly. Out of seven starters, the winner was Sal Yazen, but then he does run the Mersea Oyster Bar. Perhaps they should introduce a handicap system. 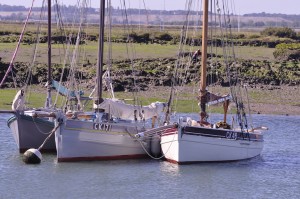 Gracie CK46. Pinky Hughes, together with joint owners Nick Purdie and Colin Bellamy-Booth (below), have had Gracie since around 2011. Before that, they had Mary CK252 which is now in France. Gracie was built in 1890 at Brightlingsea but it’s not known by whom, making her one of the few smacks with that gap in her provenance, although she started life as a half-decker doing leisure trips at Clacton. She didn’t convert to fishing – still as a half-decker – until 1910 and wasn’t flush decked until 1934.  She is 36ft LOD, draws 4ft 6in, and is of the type made specifically for dredging the creeks and beds closer inshore, whereas the larger, topmast smacks were typically 10ft or so longer and could work a little further afield.  Before Pinky and Co had her, she spent 10 years with Tony Ryan over in Kent on the Swale. She still gets over there once a year to for the Swale Smack and Sailing Barge Match held in August, where this year,  with Nick skippering and Mark, Pinky, Pinky’s eldest daughter Becky and her friend Faye as crew, she won the Calliope Cup and the Swale 2016 pennant.   But smack owning isn’t all picnics and sailing matches. “We’ve got to do some caulking this winter” says Pinky. “Rake all the joints out and replace nails and screws. And I painted the hull earlier this year and did the antifouling. She doesn’t get hauled out every year – can’t afford that – but you can always find something to do to keep her going. It’s a full-time job, really.”

The oysters, left open on the competition table, went down well – and quickly – among spectators, though it should be noted that no oysters dredged on the day were hurt in this process; those were all returned to the sea after weighing because native oysters in these waters are presently protected as part of the NORI programme.
If NORI continues its progress, that might change before too long. 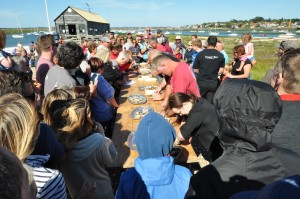 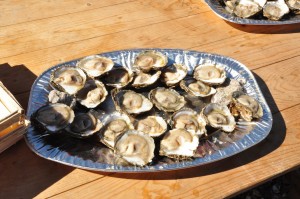 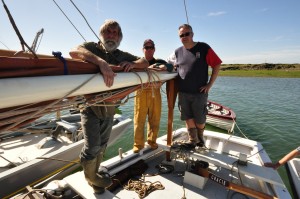 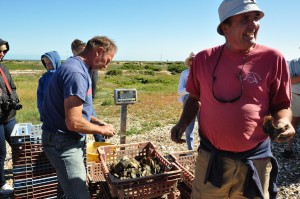 William Baker, organiser of the match 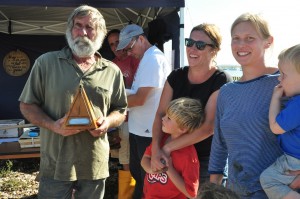 Pinkie with the John Frost Trophy