Wednesday 11th September 2019 – Serenaded by French naval military band – Musique des Equipage de la Flotte – the tone was set for the 14th Monaco Classic Week which celebrated American-Monegasque friendship at the end of a sunny day that saw most of the classic yachts out on the water off Cap d’Ail. Until Sunday the YCM Marina and Monaco’s Port Hercule plays host to some of the world’s most beautiful yachts, the throaty roar of classic motorboats following in the wake of these gaff riggers and Marconi sloops, not to mention a whole fleet of 12-foot Dinghies, an Olympic class in 1920, and full range of Metre Classes.
Gleaming brass and precious wood – 130 boats to admire on the quays and on the water
Monaco Classic Week is the only event of its kind to invite both classic sailing and motor boats, with nearly 130 boats in all, including 73 sailing yachts and Rivas and Chris Craft boats. All are here to revive the famous “Art de Vivre la Mer” – spirit of friendship that has existed for over a century from the Mediterranean shores to the North Atlantic.
Manhattan Yacht Club and the French Kiss
A touch of history, where the Manhattan Yacht Club, owner in 1987 of America 2, the yacht that was beaten by the French in the quarter final of the America’s Cup in Fremantle, Australia, wanted to sail in Monaco on the winning 12M IR French Kiss, with Marc Pajot at the helm. Michael Fortenbaugh, Vice-Commodore of the Manhattan Yacht Club, is delighted by this cultural exchange in Monaco which in his own words “has the most beautiful yacht club in the world”.
Note that the Metric Classes built after the 1906 International Rating (IR) was introduced are here in force: 6M, 8M, 12M and of course the 15M which includes the YCM’s emblematic Fife design  Tuiga, celebrating her 110th anniversary this year. The 12M class will be represented by La Spina, a masterpiece of Italian design, and French Kiss, just out of the yard after some restoration work.
And steam also!
Another icon, SS Delphine (1921), the 79m steam-boat built for the wife of automobile magnate Horace E. Dodge, makes a welcome return. It was aboard this beauty that three world leaders, Stalin, Roosevelt and Churchill, negotiated at least part of the 1945 Yalta Agreement.
The 79m SS Delphine is a steam-boat built in 1921 for Horace Dodge, co-founder of the famous Dodge car brand. Launched in 1921 and named after Horace Dodge’s daughter, of all the big steam-boats built between 1893 and 1930 SS Delphine is the only one still in service in her original configuration including two steam engines.
In 1926, SS Delphine caught fire and sank in New York, but was recovered and restored in New York. During World War Two, the vessel was requisitioned by the US Navy in 1942 and renamed USS Dauntless, serving as the flagship for Admiral Ernest J. King, Commander in Chief of Naval Operations.
Schooner of the Year Trophy Act 2!
The International Schooner Association has chosen Monaco, after Capri, for the second stage of its all-new Schooner Cup Series. A dozen schooners, including Invader (1905), Puritan (1930) and Elena of London 2009 (1910 replica) are here to compete in the Schooner of the Year Trophy. Mariette, (Herreshoff 1915) was the winner in Capri ahead of Naema, the 2006 spirit of Mylne now determined to win this Act 2 in Monaco.
Monaco Classic Week Village open to the public 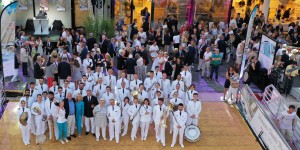 Located on Quai de l’Hirondelle in the heart of the YCM Marina, the Monaco Classic Week village is open to all from 9.00am to 9.00pm. Some 20 exhibitors are all linked to classic yachts: boatyards, craftsmen, marine painters, sculptors and photographers. For front row seats, YCM members can follow the racing from the pool area (Deck 2) and the Regatta Deck (Deck 6).
Chefs aboard!
In keeping with the Club’s Art de Vivre la Mer philosophy, the Chefs competition on Thursday was open to crew members (professional chefs or not) from all types of boat, an opportunity to demonstrate their creativity to produce dishes from a set number of ingredients paired with champagne. The dishes must be prepared on board and then presented on the quay to a jury of top chefs.
See results: HERE