Polar legend has it that the Norwegian explorer Fridtjof Nansen dreamt up the ideal Arctic ship by gazing at an olive stone. Pressed laterally, its curves would slide its body upwards. So, he thought, a vessel could escape ice by getting pushed up and floating above it. This was the principle behind the 127-foot three-masted topsail schooner Nansen was famously to take north. Fram was launched from Colin Archer’s shipyard in Larvik in 1892 and is preserved in a museum in Oslo.

Her legacy is today still sailing, arguably, in the shape of Activ of London, a cargo vessel built in Svenborg in Denmark in 1951. Oak-on-oak frame and fully ironclad, her hull regularly encounters solid ice. Built as strong as the proverbial brick sanitary outhouse, says her current captain, Jonas Bergsoe. In 1959, as ketch-rigged Mona, working to supply settlements in eastern Greenland, she was ‘squeezed out of the ice and lay on top for three days before the ice broke up. Like Fram, her [underwater] shape will allow this if ice pressure keeps increasing.’ 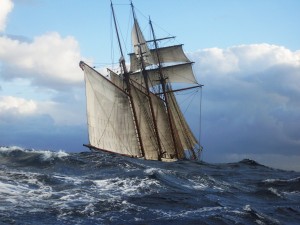 Activ has been in films including, as the Pequod in Moby Dick; Finding Home, The Arctic Giant, Gold Coast and Expedition to the End of the World

Activ was transformed into a topgallant schooner in 1975 and three metres longer overall than Fram. Her Danish master has guided her through her fair share of Force 10 seas, and rhapsodises her strengths in ocean passage-making. Who could dismiss the bliss of having more than 700 square metres of canvas at one’s disposal? It enables sailing speeds averaging eight knots. Her noon-to-noon record run is 238NM. As with all tall ships, however, Bergsoe admits his schooner performs poorly upwind, only pointing 70 degrees at best.

There’s no reason to doubt the captain when he says Activ ‘out-performs near all non-icebreakers around’.  The flipside of this, though, is that she isn’t an icebreaker, and therefore ‘has certain limitations’. In high latitudes without a bridge-deck the crew faces great challenges working unshielded from the elements. Greenland ice –  the location for Activ’s recent charter for film work – is much less predictable than more popular cruising areas like Svalbard. ‘Lots of ice sailing techniques and ice navigation knowledge must be mastered,’ Bergsoe says, ‘in order to perform in the best way possible.’  The trimasted schooner is famous for its manoeuvrability, though. Her captain says she moves with an ‘ease and grace that is a joy to behold’.

More on the Aktiv:  HERE