It is sad to report the death, on Saturday January 4, of Johnson Wooderson, better known as Woody to classic sailors and others in the wider sailing world. By Dan Houston

For the last 15 years Woody, who was 82, sailed as tactician and navigator aboard the 1928 Fife Big Class Cambria. He became a regular on the classic circuit and was well known and respected for his racing acumen as he was for his gentle bonhomie ashore. Another Cambria regular and friend John Lammerts Van Bueren described him as: “old school and thoroughly reliable; no fancy electronics, just well prepared with chart, pencil and binoculars in hand.” John’s post on Facebook received many replies noting Woody as a gentleman and he was a very popular character.

Chris Barkham, Cambria‘s long term Captain, told CS: “Woody was a good mate, he was one of the crew. Woody was just as at home entertaining owners and guests or even playing owner or guest, as he was in the crew bars or on the foredeck.

“Woody had done it all before. He served on HMS Ark Royal for his ‘National Service’. It was a time he was very fond of and he managed to mention the ship at least five times every watch on our last delivery together to the UK from Cannes for the refit in 2014  (see CSNo1)” 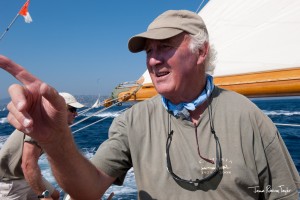 After the Royal Navy Woody raced at national level in the Flying Dutchman class, winning the European championships in 1962. He honed his racing skills against the likes of Paul Elvstrom and Keith Musto, before becoming active in the RORC, helming, navigating and doing tactics for 20 years competing in the Admiral’s Cup series. “He raced his car from London to Hamble on Friday nights to take part in the offshore races,” Barkham says. “He wanted to break both his driving record and the sailing record each time.”

Former Olympic Sailor Philip Crebbin remembers racing Victory of Burnham with Woody: “Our main sailing together was back in the Admiral’s Cup in 1981 when he was my tactician and co-helmsman. He was a major contributor to our great success that year, including winning the Admiral’s Cup, being top boat inshore and 2nd individual boat overall, as well as RORC Yacht of the Year and Solent Points winner. In the Fastnet Race that year, in a near flat calm finish, we actually achieved getting a finishing gun in Plymouth – then only given to the first two finishers on the water – in a 43 footer, beating all the maxis (then 80ft) and larger yachts across the line except for Kialoa. Woody was a major force in this, both with his carefully thought out contribution to the tactics as well as helping to keep the crew focussed and in good spirits in difficult conditions, which made a big difference in the final phases.” 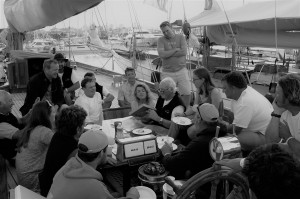 Woody’s day job at the time was working for Lloyd’s of London, the insurance specialists, and he would regularly commute from London to New York on Concorde. He got into classic yachts sailing on Jaime Botin’s three-masted schooner Adix, including crewing on her 2002 Transatlantic race. He was also in the afterguard aboard Botin’s Fife 15-M Lady Anne for the Fife regatta in 2003 (sadly the only time this author sailed with him – though we won of course). Shortly after this Botin withdrew from the classic circuit and Woody was welcomed aboard the beautiful 23-M Cambria for the Cannes Régates Royales in 2004.

“Over the next 14 years Woody only missed two regattas on Cambria,” Chris says. “He became a well known and loved member of the classic circuit with locals, organisers and crew alike.

“Woody prided himself in being perfectly prepared and organised, he never missed a trick, even if he did, he was always prepared enough to have a perfectly reasonable excuse! He never raised his voice, there was always plenty of chat (or Woody’s wittering, as we’d call it) most of it revolving around bottles of Rosé if you could lay the mark! The competitive edge remained until the end, as behind the cool exterior, Woods was always keen to debrief and look at ways of improving our effort.

“He would always be joined by his wonderful wife Victoria every Voiles de St Tropez, and I’m sure there are many who shared a café & croissant with them in the Gorilla bar on mornings prior to racing; I always knew where to find any missing crew! Woody would say he was making sure they were not getting into any mischief! He also sailed with Elena of London and Eileen when Cambria was not competing, I know they will be missing him too.

“Woody was a pleasure to have on board, he easily spanned all age groups immediately earning respect from all with his vast sailing knowledge and wonderful stories. The cockpit will not be the same without him and I’m sure I will be asking for his guidance from afar.”

Thanks to John Lammerts van Bueren and Chris Barkham for their help with this feature. 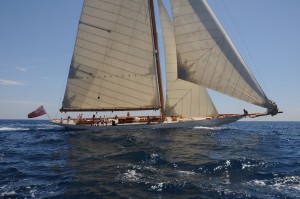