The last of our five-piece capsule collection is here. We introduce to you the fifth limited edition Consort jacket based on the 1965 original designed and lovingly crafted by our founder Henri Strzelecki, the Consort Gore-Tex® Jacket. This clever take down is at first glance incredibly true to the original, but take a deeper look and you find this is a true 21st century product. We like to think that this is how Mr Henri himself would have engineered it, had he had today’s technology available to him nearly six decades ago.
We designed and developed this limited edition with the greatest Olympic Sailor of all time in mind, Sir Ben Ainslie – A man who knows a lot about performance and appreciates working with the very best in his field including Gore-tex®.

THE COMEBACK OF THE CONSORT JACKETS

In 1965 the founder of Henri-Lloyd, Henri Strzelecki designed the legendary Consort Jacket, a product that was to become the brand’s icon. Over five decades later the jacket lives on and to celebrate the return of Henri-Lloyd back into the market we are launching over the next few weeks, 6 Limited Edition jackets based upon contemporary interpretations of the Consort concept. 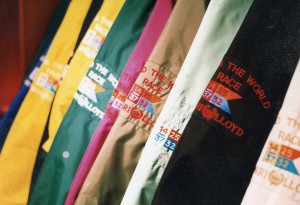