How to survive a Tall Ship

Guy Venables finds out that turning up in posh foulies is all wrong, but on the other hand attempting to ‘fit in’ with the crew is also fraught with hazards, both social and physical… and… the only useful tool on a Tall Ship is an axe, so throw away your shaving kit.

So we can assume, possibly due to midlife crisis or being on the run, that you’ve applied to be a guest crew on board a Tall Ship. You will step aboard and be shown to your cabin. This move alone will instil a sense of mistrust and resentment throughout the crew who sleep in the anchor locker, or where they fall below (or indeed above) decks.
Don’t worry about this, they actually resented you before you came aboard as, to them, you’re little more than a charterer without enough money. Never mind, you can balance it out later by deliberately dropping something small and light from the rigging, ensuring that you suffer the standard punishment of buying them a case of beer. The first thing to do is to throw away most of your kit. Everything you have is wrong. 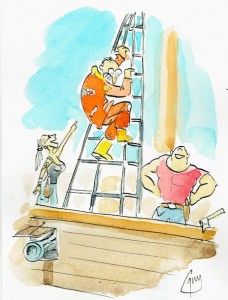 …a series of initiation tests, the first being to practice going up the rigging

1. Shaving Kit
You are sharing sail with some of the most outrageously hirsuited people alive, sporting hipster style beards and moustaches along with ear rings that don’t just go through the ears. Ludicrously topiaried and waxed facial hair is a badge of pride. While you’re at it you might as well throw away your toothbrush for the same “joiny-in” reason.
2. Clothes
Those Henri Lloyd Ocean Pro foulies will have to go too. You should have packed Doc Martens and Dickies overalls. If it rains you put an old jumper on over the wet one and light a fag.
3. Your skin
Crews of tall ships are outside so much they develop wind burn winter tans (like tramps do). They also have tattoos that usually depict things normally seen on scrimshaw. As with scrimshaw they are badly drawn because they were done by the bored cook with a badge pin and a bottle of Quink.
4. An axe
You may have thought that buying the newest multitool from Leatherman would be a handy thing on board. Sadly anything that moves on board a Tall Ship would crush such a thing like putty. The only useful tool on a Tall Ship is an axe. These can be used for nearly all the jobs on board such as haircuts, changing the mast, cutting rope or cutlery. They’re not hard to find as they’re stored stuck into the hand rails all over the ship.

Booze and tobacco are the only useful thing you can have. They are now your friends and currency. You know, like in jail.
You will be told stories about this boat’s ancient history. The fact that this actual boat was built in Baltimore in 2005 should be skimmed over. The crew are experiencing misplaced pride, in which the boat takes on the accomplishments and heritage of the old boat it was built to look a bit like. Because they’ve been living on board for so long they’ve completely forgotten what century they are in. It’s best to go along with it. They’re all wearing knives. Hide your phone and start talking in Victorian urchin speak just to be on the safe side.
Up on deck you’ll be put through a series of initiation tests, the first being to practice going up the rigging. A crew member will clamber up the ratlines faster than an escaping lizard and you are expected to follow. If you suffer from vertigo now is a good time to get them to practice a man overboard drill by throwing yourself overboard.
The other test is learning the names of all the 168 sails. This is important for when you are being shouted at in the middle of the night. There could be moonsails , spankers, crossjacks, flying jibs, headsails, gaff topsails, skysails, a square topsail, flying topgallant and I’m sure I heard talk about a golf sail. If you’re lucky there will also be stun’s’ls, a word so full of
apostrophes that nobody knows how long the original word was.
Once night falls you might imagine you will just go to bed. This fantasy will be shattered by a loud awakening when everybody is rushed up on deck. This happens every time the boat wants to tack. It is pitch black and freezing cold out on deck and you will be shouted at to pull your weight even though the thing you’re pulling is far heavier than the weight of the entire crew. Then you have to wind something and tighten some rigging so the mast doesn’t fall down. Suddenly, without you seeing, the whole crew disappear and you are left on deck in your pyjamas wearing a sock for a hat. There’s no point going back below. Your watch starts in two hours and you are pumped with fear-induced adrenaline. Being on a Tall Ship is all about teamwork but then again you’ll never see these people again so don’t confuse the issue. What they really want from you is a lazy person who doesn’t get in the way rather than an enthusiastic idiot. Why not make it even easier for them to sail their Tall Ship by jumping ship at the first port and checking in to an expensive hotel.
Some Tall Ships carry dynamite for loading into their cannons and firing salutes. When the dynamite box is open you can change the colour of the captain’s face by smoking rollies just upwind of it.
Orders are shouted by the captain and then repeated by the crew, so after the end of the week on board you will be totally conditioned in this discipline. Don’t be surprised when you’re driving home and your satnav says “Turn left,” and you retort loudly: “Turning left.”
The main thing though is to keep yourself to yourself and for God’s sake don’t call it a pirate ship.

I mustn’t go back to the Tall Ships again, to the weevil and the fly,
all I ask is a hotel room there to watch her sailing by…
Not the stink o’ sick, nor the head’s pong nor the dandruff all a-flaking,
but a Caesar salad and a nice grilled plaice with a cocktail shaker, shaking.

I must never return to the spar and plank, that place where I thought I’d died,
where I felt so small and had to crawl up rigging where grown men cried.
All I ask is a restaurant, with the wine waiters constantly plying,
and an open tab wouldn’t be bad with a head chef grilling or frying.