The two yachts were being sold as part of a classic car auction. Few autos were making their expected prices but the two stately yachts together raised just €40,000 more than the €700,000 lower estimate for Mariska alone.

There was barely any bidding in the room to raise the figures which were less than half the expected price. And at the end paddle numbers were taken so it did not look like the owners were buying their own boats. A new owner will be good news for Mariquita which has been decommissioned under covers in Lymington since 2015.

John Caulcutt, part owner of Mariquita said this afternoon that he did not know who had bought the vessel. “It’s a sad day for all of us losing the lovely Mariquita but the happy memories will live on forever. We sailed her for five years and won races and had a fabulous time, but it is good that someone else has bought her at last. You could say it’s at a knock down price but that’s the nature of an auction isn’t it? We’d had her for sale with various brokers since 2015 and never had an offer.”

The link for the auction is: HERE and the lots are number 62 and 64 respectively.

A Classic Sailor video feature about sailing aboard Mariquita can be viewed: HERE 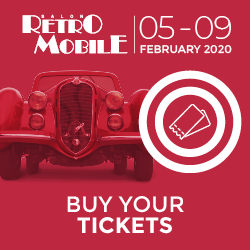 Two first International Metre Rule yachts designed by William Fife will come under the hammer at a classic car auction in France in February. There is no reserve set for either yacht.

Mariquita and Mariska were both built for the same man, by Fife’s carpenters at Fairlie on the Clyde Estuary in 1908 and 1911 respectively. They have both been restored to very high standards and race competitively on the well-established classic circuit in the Mediterranean.

At 77ft 2in 23.5m LOA, with her bowsprit and spars taking her out to 90ft 6in (27.6m) Mariska is the shorter boat and one of only four surviving yachts in the – once 20-strong – 15-M class (the others being The Lady Anne, Hispania and Tuiga). When she was launched she was a cutting edge racing yacht, built purely for winning prize money and crewed by professionals who were often fishermen during the winter. Her first owner AK Stothert was one of the most acclaimed yachtsmen of the Edwardian period. Racing in 427 regattas he won 123 trophies with 93 podium finishes. 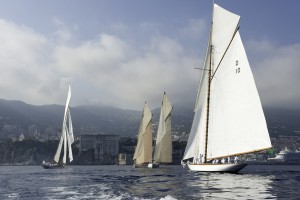 By 1911 Stothert had sold Mariska to The Hon Captain Guest (MP) and had Fife design and build Mariquita to the 19-M rule. At 95ft 5in LOA she is a huge 125ft 3in over spars. She is composite construction with wood planks on steel frames and it is a testament to the craftsmanship at the Fife yard that she lasted so long before her restoration. Mariquita is the only survivor of just four 19-Ms, all built in 1911 and raced for just three seasons before WW1 broke out in 1914. (The others were Corona, also built and designed by Wm Fife; Octavia, designed by Mylne and built by Messrs Robert MacAlister in Dumbarton; Norada designed by CE Nicholson and built at Camper and Nicholsons in Gosport.)

Laid up during World War II Mariquita was stripped of her rigging and lead keel, and became a houseboat in the mud at Pin Mill on the River Orwell in Suffolk. She was discovered there in 1987 by William Collier who was scouting out such classics for the famous Ferrari collector Albert Obrist. Obrist, who had sold most of his cars, had moved on to boats and had restored and just relaunched the 107ft (33m) 1931 Fife schooner Altair – often cited as the restoration that set the standards for all to follow. In 1991 Obrist set up Fairlie Restorations, the high quality classic yacht specialist on the Hamble (they closed in 2016). Mariquita was acquired awaiting an owner and Ernst Klaus and Peter Livanos came to her rescue having a superb one completed at Fairlies between 2001 and 2004. 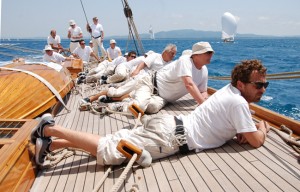 Sailing on board Mariquita © Dan Houston

Mariquita wowed the classic sailing world when she was relaunched and became a serious contender in the re-emerging Big Class on the classic scene. She’s won numerous awards in events years including winner of the Monaco Classic Week, Régates Royales de Cannes and the Voiles de Saint-Tropez. In 2014 she won the Big Boat class in the Panerai Trophy, overall. She was laid up after 2015 and is maintained, mostly under cover, in Lymington.

For further details on this auction and how to register an interest please click: HERE

A rare event for classic sailors is a Fife Regatta, featuring some of these fabulous yachts making a pilgrimage to their launch waters on the Clyde. Since 1998 only four Fife regattas have taken place and there will be a fifth from the 4th to 11th June, in 2020. See more: HERE

Mariquita sailing off Naples towards the Isle of Capri. © Dan Houston 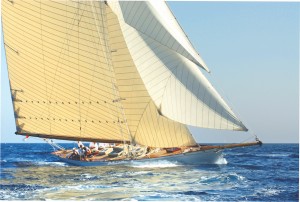