Dan Houston 2020-02-13T17:37:52+00:00 February 13th, 2020|News|0 Comments
We were very sad to hear of the death of Sue Farrer who, with her husband Peter, was a stalwart of the Old Gaffers Association and a huge force for good (and fun) in the world of traditional sailing. Sue’s bright-smile outlook, ready sense of humour and quick wit made her a joy to be around.

Sue was born on the 8th May 1948 at Hope Hospital in Salford and spent most of her younger life in and around South Manchester and Wilmslow.

Sue and Peter met in the mid 1960s and it was in 1970 that they joined East Cheshire Sub-aqua Club, the beginning of a lifelong interest in the sea. Following Sue and Peter’s wedding in 1971, and setting up home in Alsager, they bought a small inflatable boat, but soon moved on to a Skipper 12 sailing dinghy, learning to sail on Winsford Flashes. When work took them to South Africa they were involved in the local diving & sailing clubs.

Once back in the UK, Sue and Peter drifted from diving to Sailing and Peter embarked upon building their first boat, Thokolosh based on a Folksong Hull from Eric Bergqvist. They sailed her for four years until buying a new Kelt 850 named, Highfibre. Sue & Peter sailed Highfibre out of Conwy & Holyhead until 2018, when Storm Emma (The Beast from the East) destroyed the marina and 85 boats.

In 1987 Sue chartered the J-Class Velsheda for a weekend, and later the Thames Barge Hydrogen.

During this period the couple helped Eric Bergvist (already an Old Gaffer) at Southampton & London Boat Shows, promoting his 16ft gaff rigged Winkle Brig. It was at London in 1994 that they were approached by Peter Lyons & Alan Aston from Northern Ireland OGA. They were invited to a Carrickfergus OGA event. Not have a gaffer at that time, Eric lent them a Winkle Brig. It was following this event that they joined the OGA Northwest area.

The next year they acquired Nymph, a 20ft ¾ decked gunter rigged sloop, built in 1923/4 and in rather poor condition.

Nymph’s inaugural trip was to Bristol Festival of the Sea in 1996. The same year, they trailed her to the Falmouth Classics (a 640 mile round trip) only to find they could not sail because of the weather.

Sue decided they needed to establish a dedicated small boat event at which they could almost guarantee a sail. Having scoured the Lake District for a suitable venue, they settled on Derwentwater Marina, and Sue organised the first dedicated OGA small boat event for 6th September 1997 – Princess Diana’s funeral day! The Derwentwater event was a great success, but each year details changed, until after 10 years they stopped it. The event attracted between 20 – 30 boats each year, and although not a Trailer Section event, it did help with the formation of a dedicated Trailer Section in the OGA.

During this time, the then President of the OGA David Cade asked Sue and Peter to reform the old North Wales area. This was done, with Sue as Secretary (a post she held until her death) and Tony Mead (Conwy Harbourmaster) acting a president. The area was based in Conwy, and Sue sat on the River Festival Committee for several years.

In 2006 the couple moved to Holyhead, and in 2007 Sue organised the First Holyhead Traditional Sailing Festival. This event went from strength to strength and gained EU funding for 3 years. The event attracted between 30 & 50 boats each year; the venue making it suitable for all type of vessels, from large (Zebu, Soteria, Joanna Lucretia, Vilma) to small (Optimist & Mirror dinghies), and attracted pirates from Liverpool & Anglesey.

During her time in the OGA Sue spent over 20 years on the Association committee, and 10 years on the General Management committee as trophy secretary, ensuring that the Association trophies were kept under control. She was a familiar sight at OGA stands at ExCel London Boat Show & Beale Park Boat Show, and at the three Portsmouth Festivals of the Sea.

Sue was known for her energy and tenacity, organising many minor events for sailors and divers during her life. She passed away without warning on January 15th 2020.

CS thanks Peter Farrer for this obituary. 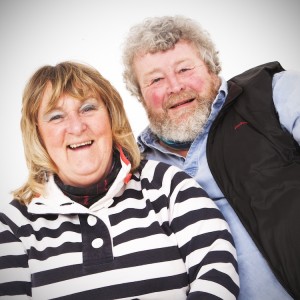 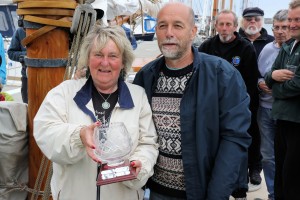 Sue at the Holyhead Traditional Sailing Festival – which she organised 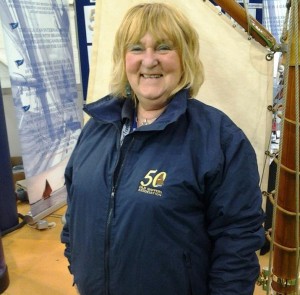 Sue’s sense of humour was infectious