The International Association of Cape Horners whose Patron is HRH The Duke of Edinburgh, has a new President – The Earl of Portsmouth DL. As Quentin Wallop, he rounded the Horn during the Second Whitbread Round the World Yacht Race in 1977/8, aboard the British maxi yacht Great Britain IIskippered by Rob James, which went on to win overall line honours. Not content with just a single rounding, Quentin then skippered his own yacht, the ketch Ocean Mermaid, from New Zealand to the UK via Cape Horn. The voyage through the Southern Ocean proved to be a very rough passage resulting in damage to the rigging, which required repairs in Port Stanley before returning to the UK.

Quentin remembers vividly his first rounding of Cape Horn, “It was at night; the sea was calm, the breeze relatively gentle and all that was visible was the surprisingly feeble
loom of the lighthouse, which belied the notoriety of this iconic island. 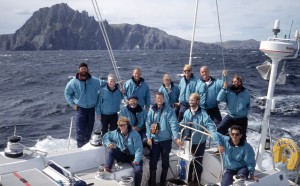 The crew of Pride of Teeside, competing in the 1992/3 British Steel Challenge round the world yacht race rounding Cape Horn west about. The Race, organised by Sir Chay Blyth commemorated his own world-first, a solo non-stop circumnavigation against the prevailing winds and currents back in 1971/2 aboard the on a 59-foot yacht British Steel. © Andrew Chamberlain/PPL

Although the rounding itself was somewhat anticlimactic, the sailing before and indeed afterwards was the most exciting of my life.  For a young man of 23 there could hardly be a more exhilarating experience than crewing on a maxi yacht; pushing her as hard as we could, ‘running the easting down’ in the Roaring Forties and the high latitudes of the Southern Ocean. I was incredibly fortunate to have had this opportunity”

The International Association of Cape Horners (IACH) was founded in 1936 by a group of French Master Mariners based in St Malo to form an exclusive, albeit dying bond between those who had sailed round Cape Horn in square rigged sailing ships. These are now history. The last commercial sailing ship voyage was in 1949 when the Pamir and Passat sailed from South Australia bound for Falmouth. In 1969, the British Chapter amended the membership criteria to read: ‘To promote and strengthen the ties of comradeship which bind together the unique body of men and women who enjoy the distinction of having voyaged round Cape Horn under sail.‘

Specifically, Full Membership, which currently costs £20 per annum, is open to those who have rounded Cape Horn under sail as part of a non-stop passage of at least 3,000 nautical miles which passes above the latitude of 52° South in both the Pacific and Atlantic oceans and is completed without the use of engines for propulsion. Members include Sir Robin Knox-Johnston, Sir Chay Blyth, Don McIntyre, Pete Goss, Tracy Edwards and Jean-Luc Van Den Heede. 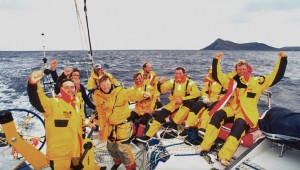 The Crew of of the Whitbread 60 yacht Intrum Justitia celebrate rounding Cape Horn during the 1993/4 Whitbread Round the World Yacht Race. All are eligible for membership to the exclusive International Association of Cape Horners. © Rick Tomlinson/Intrum Justitia/PPL

Those with an interest in Cape Horn but whose experiences do not meet the full membership criteria, can become an Associate of the Association. One of the latest of these is Susie Goodall whose yacht was pitch-poled and dismasted 2,000 miles West of Cape Horn during the 2018/19 Golden Globe Race.

This modernising approach has opened membership to all those who have raced around The Horn in events like the Whitbread and Volvo Ocean races, Sir Chay Blyth’s Global Challenge events, the Jules Verne Challenge and solo events such as the BOC Challenge, Vendee Globe, Five Oceans, Barcelona World and Golden Globe races. Membership is also open to the many who have cruised around the infamous Cape under sail.

“Those who qualify for membership of the IACH will have rounded the Horn after a long, arduous and very likely dangerous voyage under sail. To be a member is a singular honour. I urge all who are eligible to join this special fellowship of sailors”,  says the Earl of Portsmouth, the Association’s new President.