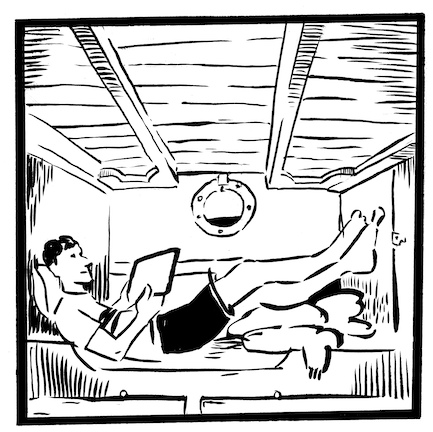 Film and DVD links and reviews

Arthur, Nancy… and me

The boat that inspired Arthur Ransome. Peter Willis talks to Dan Houston about his lifelong passion for the children's author Arthur Ransome and his 1931 Hillyard cutter Nancy Blackett. Peter was recognised in the 2019 Royal Yachting Association Volunteer Awards with a Lifetime Commitment Award for his 22 years with the Nancy Blackett Trust, [...]

This is a lovely short film, by Alvaro Cerezo, featuring the late Maurice Bailey who, with his wife Maralyn spent 117 days adrift in a liferaft in the Pacific Ocean in 1972. The couple sold everything to buy their boat and left the UK heading for a new life in New Zealand. Their Golden Hind [...]

2011, Dir Jeffrey Kusuma-Hinte, 96 mins This film charts the life of the Gannon & Benjamin boatyard on Martha's Vineyard – the island off Massachusetts, where they restore wooden boats and have built a series of traditional schooners. Charlotte was the project for partner Nat Benjamin, designed and built as his own boat and launched in [...]

1971 Dir Patrick Garland 50 minutes Based on a short story and then the novel by Paul Gallico, in 1941, this classic film is a gentle, if sentimental, love story of a reclusive crippled artist (Richard Harris) who rescues a Canadian snow goose with the help of a local girl (Jenny Agutter) against the 1930s [...]

1924 Dir Donald Crisp / Buster Keaton 59mins     Buster Keaton's all at sea again, as the unwitting, hapless hero of this brilliant silent comedy where his genius for visual gags and narrative direction (he co-directed the film with Donald Crisp), can still entertain and enthrall us nearly a century later. The [...]

Sailing to a Viking festival across the North Sea in January

Inspirational winter passage by Erik Aanderaa, a true latter-day Viking, sailing his Contessa 35 Tessie from Haugasund in Norway to the three-day Up Helly Aa winter Viking festival at Lerwick in Shetland (in 30 hrs!) on 29 January this year. In temperatures are around 1ºC Erik gets onto the foredeck (sans harness tut-tut) to tell [...]

Documentary 2018 Dir: Alex Holmes 93 mins Maiden opens in UK cinemas on Friday 8th March This is a truly inspirational film. It takes us back a bit, though not too far, to 1989 and the Round the World Whitbread – a gruelling nine-month yacht race presided over by lantern-jawed skippers and winch-grinding gorillamen, testosterone [...]

1975,  Dir: David Gowing, 51 mins The old timers speak out across the decades, of their times working in the Thames Sailing Barges, a shoal draught coastal freight carrier that had not changed much since the 1600s. The film is made by documentary maker and keen sailor David Gowing and consists of archive footage spliced [...]

The Age of Sail

This is a fabulous short animated film with Ian McShane playing an old Bristol Channel Pilot skipper (and Pilot) Wm Avery who feels washed up and unwanted in the age of steam. He's on a solo passage to Fiddlers Green, beyond the western approaches when a girl, Lara Conrad played by Cathy Ang, falls off [...]