Tally Ho has a new owner

The famous Albert Strange yacht Tally Ho, which won the Fastnet in 1927, but which has languished ashore for many years at last has a new owner. Leo Goolden – boatbuilder and yachtsman, bought the beleaguered yacht for a dollar at the end of May and put her on a truck yesterday.  Leo restored his Nordic Folkboat Lorema and took her across the Channel and then Atlantic (see Classic Sailor issue 15 cover and our feature in CS003).

As we reported in March the vessel was in danger of being cut up after spending many years ashore in Brookings Harbour in Oregon, on the American Pacific Coast. The Albert Strange Association had set up a website dedicated to her rescue: HERE

She had been cared for in Oregon by Pat Kellis, and his efforts in keeping Tally Ho covered and sensibly protected for so long have no doubt contributed to her continuing viability for restoration. The Albert Strange Association, which has “owned” the yacht recently has collected some £3,000 in funds which it says  is going towards the cost of moving her from Oregon to Port Townsend in Washington State.

With this year being a Fastnet year Classic Sailor is planning a feature on Tally Ho and her Fastnet win 90 years ago in 1927 for our next issue. It’s already in and makes fascinating reading: watch this space…

Meanwhile Leo has made a video of his first visit to the boat which he put online today and can be seen: HERE

Our story on her in March can be seen:HERE 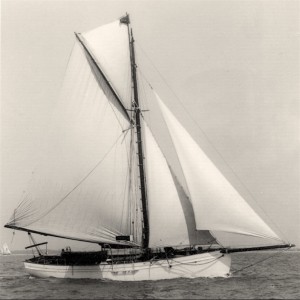 Tally Ho in her heyday 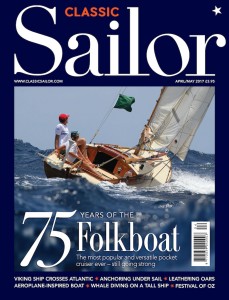