The sailor’s clasp knife is a part of his dress at sea. Here we have put several classic and current models to the test.
By Guy Venables and Dan Houston

The main advantage of a folding knife is that it can be always in your pocket and therefore to hand whenever you need it. That is providing that it’s in a pocket that isn’t under a pair of sallopettes, or lost in one of the hundreds of pockets it’s now possible to wear in modern sailing gear. Although not as quick to action as the sheath knife it also is unobtrusive, won’t snag on rigging and some can be opened one handed.
The blades can be many different shapes and vary from Sheepsfoot to a Wharncliffe. It is important that they lock so they don’t close on your hand and the ones better suited to sailing don’t have a pointed tip so you don’t stab yourself when working on a heaving foredeck or burst a liferaft at an inopportune moment. That said, as a general purpose knife a point of some sort can be handy, so within the best design for sailing come many compromises. A rope cutting serration, for example, is good for cutting rope but difficult to sharpen and unsuited to finer tasks like finishing splicing or food cutting.
Legality: “It is illegal to carry a knife in public without good reason – unless it’s a knife with a folding blade 3 inches long (7.62cm) or less.” “Lock knives are not classed as folding knives and are illegal to carry in public without good reason.” It is the “good reason” clause here that might rely on an understanding policeman and could be argued, especially given the necessity of a locking blade whilst sailing, that there are potential life saving qualities of having a knife on you. The received wisdom is to keep it in your sailing bag before getting on a boat. 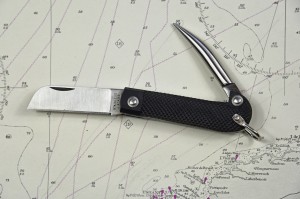 Pusser’s Dirk 2 piece navy clasp knife
This is a smaller 2.5in (65mm) stainless copy of the famous Royal Navy issue clasp knife (which had grey ally scales and a handy screwdriver tip beneath the lanyard ring). It’s a lovely knife – super sharp and good in the hand and although they do not lock the blade and spike have solid opening engagement, so normal use should never present a problem. A great Sheffield-made knife for a young sailor who is going off on a Tall Ship.
sheffieldknives.co.uk £42.40 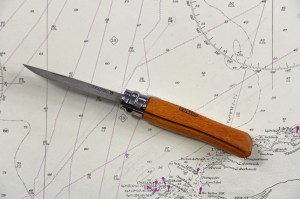 Opinel 7 Carbon steel
Ask a French yachtsman what his favourite knife is and it is invariably this: The old faithful, with, here, a carbon steel blade which can be made very sharp. This blade is just under three inches and has a locking collar built into its cylindrical bolster. We love these knives for their rustic charm and reliability – this one was 7 euros at a French market. If you are worried about the point then two minutes on a belt sander gives you a rounded shape – but after that you can’t use it to pick up a piece of cheese!
opinel.com/en £5.99 (at Decathlon) 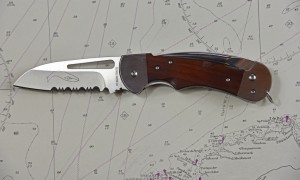 Myerchin Gen2 Captain Pro wood handle
We are in awe of this knife which defies the basic rule that a folder is always inferior to a fixed blade – the one handed opening is always smooth and once open the knife sits in the hand like an extension of your arm. The powerful German marine stainless 3/4 serrated blade has enough carbon to keep it hard and sharp and this thing cuts the edge of thin paper cleanly. There is a shackler on the blade which is nearly 4mm thick at that point. One of its best features is the locking 3in (75mm) blade and locking spike which gives a lot of confidence.
myerchin.co.uk WF300P model: £80.59 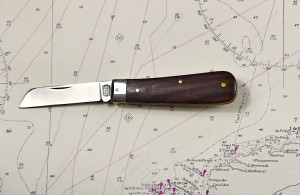 Farmer’s Lamsfoot pocket knife
The shepherds of north country Britain wanted a knife to trim the hooves of their sheep and this characteristic blade shape was evolved to fit the purpose. The blade can be held easily by the fingers and the lack of a point made it less easy to injure the kicking ewe. Sailors took these knives to sea for the same reason; the blade can be opened in the cold and wet. This pattern is still handmade by Arthur Wright in Sheffield. With a 2.5in (70mm) blade and rosewood scales it is a lovely sharp knife, of heirloom quality and only rarely out of our pocket.
knives-and-scissors.co.uk £28 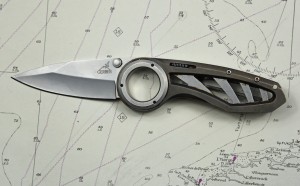 Gerber Remix Fine Edge
Although sporting a dangerously sharp point this knife has a unique advantage so we included it. When up the rigging with our finger through the eye hole we found we could work with both hands on another job without dropping it, wearing the knife like a forefinger ring then proceeding with cutting, in effect making it a no handed knife! It locks open and clips onto a belt. (they do also now make a drop point which would be better suited to sailing.)
www.gerbergear.com From around £36 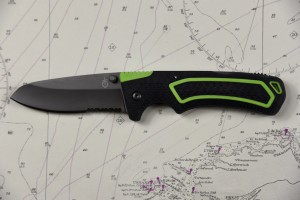 Gerber freescape
This is a drop point bladed folding knife that tries to address everything. It has partial serration allowing for cutting rope with ease, while the top end has the fine edge for more delicate work. It can lock open or closed, has a really good grippy handle, can be opened one handed ambidextrously and comes with a sheath that keeps the knife near at hand on a belt loop or cross strap. It’s also very light.
www.gerbergear.com £43.99 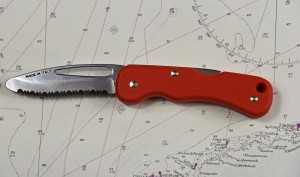 Red sailboat safety knife
Here’s a Teflon coated stainless steel bladed safety point knife with a fully serrated edge and shackle key. It locks open and has a solid plastic grip. It’s designed to fit in most dinghy tops of buoyancy aids and is Inexpensive and functional. This is the sort of knife to keep in your grab bag and the shackler aids one-handed opening. But the serrated edge is hard to sharpen and mostly suited to cutting rope – it’s OK with an apple but does not feel the same as a straight edge.
www.sailboats.co.uk £17.95 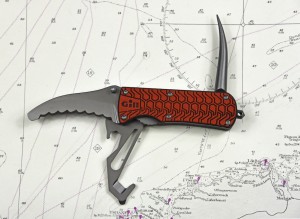 Gill Marine Tool
This is a knife that is trying hard not to look like a knife. Unfortunately the sharpest thing on it is the marlinespike. Although that does not lock, the shackler and 2.3in (60mm) scalloped serrated blade do, but the latter is as dull as a bored friend. The hook release cutter fared OK with stuff like paracord and we do like the chunky feel of this in the hand with its grippy red scales. Comes with a belt pouch.
www.gillmarine.com £29 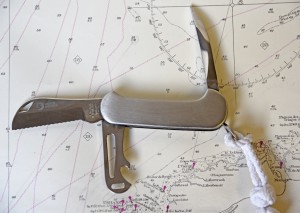 George Ibberson heavy duty shackler
The famed Ibberson is really tailor made for the sailor. The 2.3in (60mm) serrated blade is a traditional sheep’s foot, there is a separate shackle key and a squared body marlin spike (which makes prising open knots easier) bottle opener, screwdriver and clip lock, all in satin stainless scales.
Ibberson has a 250 year tradition in Sheffield and was one of the first firms to make a stainless steel blade there in 1914.  eggintongroup.co.uk  At £43.95 from Amazon: HERE 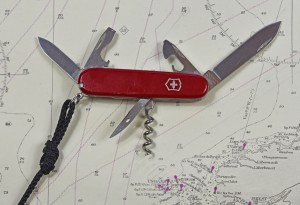 Swiss Army Spartan Knife
It’s fashionable for sailors to knock these little pocket tool kits –and you really should not use the awl as a marline spike or to open shackles. But the blades are super sharp and the screw-drivers are often the only ones on hand, and of course the bottle openers… how many times have we used these after a race for that?! As an auxilliary then, to your deck knife… these are a great daily unobtrusive friend.
swissarmy.com From £17.52 online (Amazon). Find it: HERE 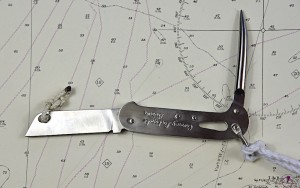 Captain Currey Lockspike Bosun
Captain Charles Currey’s original design (from when he was disabling mines and needed a non-magnetic knife) in 1945 became the bedrock of his company and is largely the same today. We’ve used one of these since childhood and it remains sharp and fit for purpose. The only change is a hole in the top of the blade to facilitate opening when frostbite sailing. Very slim at 6mm wide, with a 2.5in (65mm) sheepsfoot blade it stays comfy and unnoticed (til you need it) in your pocket.
captaincurrey.com £29.95 Or at Amazon:  HERE

This review of 11 knives appeared in print in the December January issue of Classic Sailor, No13

The sharpening of knives is a contentious issue, as soon as you’ve cracked it someone else will come along and tell you different but here are some guidelines for you to try out. 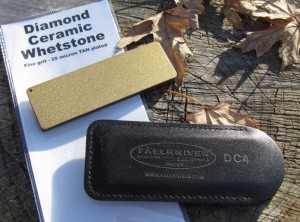 Knife sharpeners that you drag through a v shaped slot are fine and they do sharpen your knife but they tear a blade’s edge, you lose metal, it bluntens quickly and there’s little finesse. Better to hone the knife properly. There are expensive systems to sharpen knives to an exacting edge (17 degrees) but with a bit of practice the humble kitchen steel, often with its bone or antler handle, now readily available in all charity shops, is best. Once you get used to holding the knife at the correct angle you can give life back to a blade with a few swipes. (Never let anyone else do this for you, they’ll inevitably hold it at a different angle and negate plenty of hard work.) If the knife is sharp you will only need to swipe away from your body, it’s less abrasive to the blade. If your blade is really blunt you COULD buy an expensive ceramic steel or you could simply upturn a ceramic cup and run the blade over the unglazed circle on the bottom (if you can find a ceramic cup on a boat!). A good compact sharpening stone for your ditty bag is the Fallkniven DC4 which is available in several bushcraft stores, or £17.99 on Amazon:  HERE

For perfection you might use a glass steel rod but I was taught by the hicks in America that a free alternative is to roll down a car window and to use the curved top edge of the reinforced glass. GV 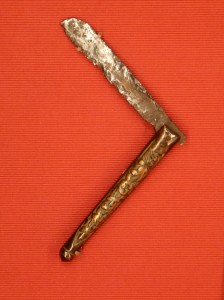 Early clasp knife, from around 1500ad, found in the River Thames 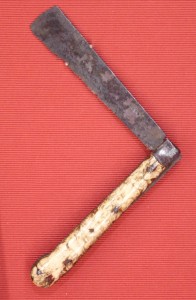 Basic folding knives go back before Roman times and examples with bone handles have been found from the mid iron age – 600 BC. Mass production first began in Sheffield around 1700 and included examples like the folding knife, or razor, above, by Wm Marsh working in Sheffield (1693 – 1710), displayed at the Sykes Gallery for steel cutlers in Sheffield.
Stainless steel, invented in 1914, was not really hard enough for knives before the 1940s; the Royal Navy carried on issuing its carbon steel clasp knife until the 1980s.
Also known as the pusser’s dirk this was issued to seamen as Admiralty pattern 301, with horn scales from 1910 to 1937 when it became 301B with alloy scales. These are now collectors’ knives but still make great sea tools. If the blade gets loose you can pean the rivet snug with a hammer. 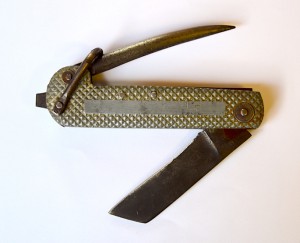 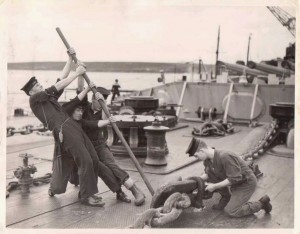 Royal Navy issue knives – or Pusser’s Dirks, were worn by sailors for everyday use