Some 47 volunteers have been recognised for their dedication and achievements in boating at the Royal Yachting Association’s annual Volunteer Awards on Friday, 22 November.

The awards were presented by Her Royal Highness Princess Anne to volunteers from as far afield as County Down to Torquay at a prestigious ceremony held at One Great George Street, Westminster, London.  The RYA Volunteer Awards are divided into four categories: RYA Awards, RYA Community Awards, The Francis Elkin Award and the Family Award.

RYA Community Awards
The RYA Community Awards are presented to outstanding individuals for their commitment and services to boating at club or grassroots level. Individuals are nominated by clubs, centres or organisations and awarded across three categories: Lifetime Commitment, Outstanding Contribution and Youth.

Classic Sailor‘s Peter Willis (see above second row on right) was presented with a Lifetime Achievement one of the RYA’s most prestigious awards by HRH the Princess Royal, President of the RYA, in recognition of his commitment to the Nancy Blackett Trust.  “I met a lot of interesting fellow sailors, and the lunch was excellent; even my wife, who doesn’t sail, was glad she’d come,” said Peter. See our in depth video interview with Peter Willis about his work with Nancy Blackett:  HERE

Sheena Barrow was presented with a Lifetime Commitment Award for her dedication to Orford sailing Club where she has been particularly effective in recruiting youngsters and giving them the opportunity to get out on the water. “I’ve always had a passion for sailing since I was 11 and I’m now 72! I think kids are really lucky if they do get a passion for something and for me it’s always been the water and messing around in boats” she said.

Abbie Brown was receiving a Youth Award for her achievements in her role as Junior Commodore and Assistant Instructor at Donaghadee Sailing Club. “From volunteering I think you learn good life skills, good teaching skills and how to be kind” she explained “When I was younger, I learnt how to sail with people who were volunteers so it’s a great way to give something back”.

Francis Elkin Award
Jan and Richard Gaskell were recognised with the 2019 Francis Elkin Award, given each year in recognition of a significant contribution in time, effort, and personal endeavour to enable people with disabilities to become involved in sailing.

Jan and Richard have developed and promoted Westbere Sailing Opportunties (WSO) while also running the Westebere Frostbite Sailing Association (WFSA) for the past 17 years and are dedicated to helping people with disabilities get out on the water.

Family Award
The RYA Family Award is presented to a family group deserving of recognition for the impact they have made both as individuals and a family. This year it was awarded to the Hotchkiss Family- Ian, Sue and their children Sarah and Joe Hotchkiss from Clevedon Sailing Club. 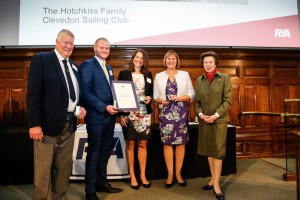 The Hotchkiss Family with Princess Anne

The family has been involved in the running of the club since 1947 when Ian’s parents Bryon and Jean founded the club and played an active role. Since then the family’s commitment to CSC and day-to-day management over 70 years has been described as ‘epitomising the concept of volunteering within the sport’.

“Both the children were cadets there so they’ve grown up at the club, I was a cadet there, as well as my brothers and husband” said Sue. “From a family point of view it’s been lovely to watch us come through it, then the children come through it and to actually give so much back to the club and to be recognised for it” she concluded.

RYA Awards
Jonny Cormack, Paul Kimmens and Robert Lamb were awarded for their commitment and services to boating and the RYA at a national level. James Allan, RYA Scotland CEO attended the event and concluded: “Our sport genuinely would not exist if we didn’t have the cadre of volunteers across the clubs and organisations, no matter what boating it happens to be you’re involved in.

“The volunteer commitment really is the bedrock of everything our sport depends on in the UK”.